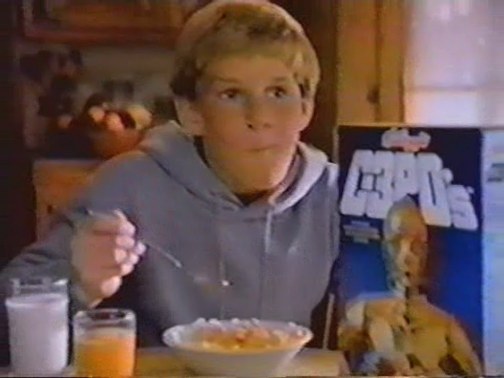 Whenever an epic film franchise hits the screens, it’s almost a given that commercials on everything from socks to cheese slices will be all over the place. Star Wars was, of course, no exception. Now, despite the fact that nearly every toy ad from the films was nutty in its own right, these twenty commercials are about everything but the playthings. Take a look at the bizarre and laugh.

So the assumption here is that Aliens have the same tolerance for alcohol as humans. That guy that anally probed me sure wasn’t drunk.

Oddly enough, this was the better of the two compared movies. Who would have guessed?

Call me ignorant, but isn’t the fun of having a Name Decoder already ruined by the pictures of the characters all over the item? Not very secret.

Hone Your Jedi Skills By Playing This Thing

Tis is where the Jedi Kid got his mad talent.

Part One of the C-3PO Cereal Saga

Ad wizards: “Let’s make a C-3PO cereal! Kids will love it!”
CEO: “What’s he, like a robot or something?”
Ad wizards: “Yeah… we can make like his head a cereal shape! Maybe some of those marshmallows!”
CEO: “Or… Siamese Cheerios…”

Believe it or not, I have a box of this stuff. It’s empty and I bought it at a garage sale years ago. I am a dork.

Why is Seeing R2-D2 Puffin’ on a Smoke So Cute?

This ad is the very reason I only smoked for eleven years instead of fifteen. Thanks Star Wars!

Star Wars and NES: A Match Made in Heaven

This game had 2 problems: It was hard and it sucked. Also it sucked hard.

We had a Burger Chef around these parts when I was a kid. They had cool promos for sure.

I have one of these and a white plastic one from… wait, you don’t care.

Strangely, I don’t recall McDonald’s getting in on any of this action.

Even without the added benefit of Star Wars this would be an odd ad.

The Choice of a New Generation

So does the fact that Coke had no part in shilling Star Wars have anything to do with McDonald’s avoidance?

Their Credit is Bad, Too.

One Of My Favorites

Wait, isn’t that really how they work?

All Four of the Spike TV Spots