Twenty Pieces of Brain Candy From The Kids in the Hall 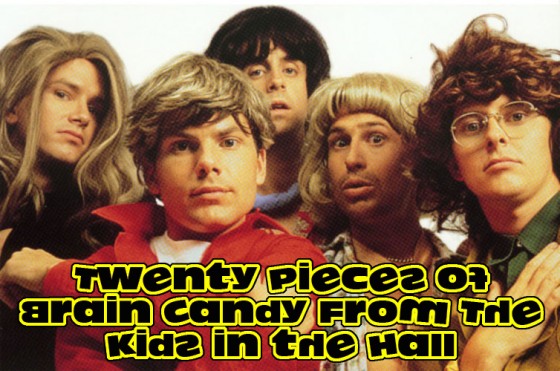 This is typically the part where I do a little run-down of the subject matter at hand. I fill a short paragraph or two with interesting nuggets of information about the person, object, or food item I’m about to shove down your throat. But you know, if, for some reason, you honestly have no idea who The Kids in the Hall were (and are), then you need to turn off your computer, locate something sharp, and impale yourself with it. Okay, okay… perhaps that was a bit too harsh. I guess it’s possible that some people out there remain unaware of the genius of this comic troupe, and I guess I can stipulate. But only just a little.

The Kids in the Hall were formed in 1984 and ran, in their original incarnation, through 1996 when their film ‘Brain Candy’ was released. Ah, and now we have a title. Anyway, most of their work could be seen here in the states on HBO, Comedy Central, and CBS. They were produced in large part by the same guy who still, sadly, brings us SNL every week, Lorne Michaels. Fortunately he knew when a good thing ran its course before becoming a sorry farce with TKITH… Anyway, the group formed with quintet Dave Foley, Kevin McDonald, Bruce McCulloch, Mark McKinney, and Scott Thompson gave us many favorite and oft repeated skits, including Cabbage Head, I’m Crushing, Your Head, and The Chicken Lady, Sir Simon Milligan and Hecubus. Ah but those were but surface scratches of the whole picture. So, if you know them and love them, or are new to their very existence, please enjoy the following twenty entries. Minus any of the four examples cited above. Because I said so.

I’m pretty sure Kevin made the cutest woman. I also can’t believe I just said that.

“I was reading about cholesterol… I had no idea?!”

I love how the only gay cast member is the one who’s ogling Dave’s cans. Classic.

This is, hands down, my favorite sketch. Probably because we’ve all been in this spot before.

“Why don’t you just shut up and tell me where the shoe store is, huh? Ya jerk.”

Proving once again that Bruce is easily the oddest -and possibly funniest- cast member. Maybe.

Another classic featuring Bruce as Gavin.

For a sketch that’s essentially a convoluted mess, it’s absolutely one of the funniest of all time.

“Well what’re you then? Some sort o’ prick?”

“We love him… and he loved that wheel.”

Daves I know (Sorry about the quality)

There. Now just try to get that tune outta yer head.

“Hi. I’m a Scientist… I’m with the Loser Research Foundation.”

Can I Keep Him?

This sketch in an of itself could have been the basis for a Kids film. Very well done.

The King of Empty Promises