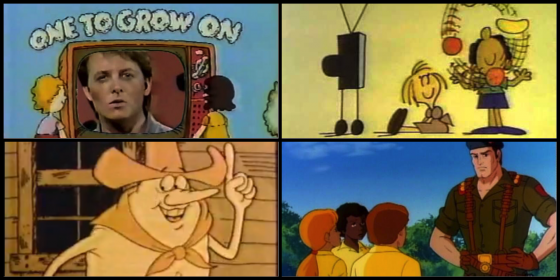 Being a child of the 80’s guaranteed you a few inalienable rights and privileges. First off, you got to hear Hair Metal fresh off the press. Secondly, your cereals were all basically candy. Thirdly, and most importantly, your Saturday Morning cartoons were always inundated with commercials shilling toys and goodies you just had to have. In fact, most of the cartoons you were watching those wonderful Saturday mornings were basically commercials themselves! But it’s not those shows, nor the ads selling toys or video games we’re talking about here. No, we’re talking about things a little more bizarre and a little less important.

The commercials being focused on in this article are those you remember but don’t really recall why you remember them. None of them are selling anything to children in particular, and none of them provide any kind of commercial importance to children as a whole, ie: no toys, no cool shoes, no amusement parks, no cereal, no sugary snack foods, none of that stuff. But these ads are nostalgic and part of our 80’s childhood just the same. They are largely Public Service Announcements, but also other commercials with positive educational messages. Stick around, you’ll get it.

Sure, it’s got food in it. In fact, the point of this PSA is to work out your choppers by eating HEALTHY foods. What kid gives a crap about that? But we all remember this ad, don’t we?

Do Not Swallow Whole, Idiot!

Another snack ad where they implore the children to not swallow their food whole because this was some kind of epidemic back in the 80’s, apparently. Choking on whole chickens and full bowls of mashed potatoes was a huge issue.

This is another PSA where teeth are the focus and how best to take care of them according to an animated booger wearing a hat.

This is How We Get Terminators

Back in the 80’s, computers were really starting to come into their own and were finally made readily available to the home market. Even if they cost as much as a decked-out Volkswagen, people still bought them. Anyway, this Mr. Chips explains things to his boy, Scooter.

I think ABC really just wanted children to be boring and have no friends. This little girl has so many delicious beverage choices, yet decides on… water? What, is she from a Third World nation where water is some kind of precious commodity? My guess is yes.

The Shot Heard Round The World

To be honest, we could have filled this entire article with just Schoolhouse Rocks info-videos because they were just so well-known and cool as hell. Well, we didn’t, but we chose this one to represent their entirety because we like it.

The point is hit pretty quickly here: eat fruit, especially the four types that have skin or peels. Never eat any other kind of fruit. Ever!

Here we see poor Willie, locked out of his house because -and let’s make sure we all understand the point here- he lost his key. This entire predicament is his own stupid fault for losing his only way into his home. Willie is an idiot.

Get a Damn Job!

Wow. These PSA’s really wanted to make sure the youths of the 80’s had jobs and could support themselves as soon as humanly possible. That blob will mess you up, kids. It’s an important lesson.

One to Grow On was a series of PSA’s featuring celebrities of the 80’s basically telling kids not to be giant dumb asses. In this heartwarming tale, a winning baseball game prompts one of the kids to reach for a cold oat soda just because his pops does. Never once is it mentioned that beer isn’t for kids, duh.

This one’s kind of all over the place. First, there’s some jerkweed tennis player in his whitest whites (also he’s really white, so…) and the kid with him looks on in awe. Then the guy slices his finger with the tennis ball can and flips his shit as blood flies all over the place! And there’s a doctor and… it’s all just too much.

The Cat is Homeless

Captain O.G. Readmore is a cat who really wants you to read wherever you go. He is obviously an alley cat, a fact you can tell just by looking at his fingerless gloves and his trashy living environment. But hey, he has books!

Another computer ad letting the youth of the 80’s know that they are the ‘Computer Generation’. Totally awesome!

That weird yellow booger guy is back! Timer is his name, and ridiculous songs are his game! Well, I will give him the fact that he is really into his job and totally digs wanting you to eat healthy. And for that, booger guy, we thank you.

Of all the on-air TV personalities of the 80’s, I think I find it most disturbing that they chose Pee Wee Herman to tell kids to lay off crack. You see, it always seemed that this dude was on so much of the stuff just to keep his manic personality on full tilt that his personal stash must have been outrageous. Apparently not.

Don’t Be a Yuck Mouth!

Trying to get kids to do anything useful on Saturday mornings was an exercise in futility. So it makes sense that there were so many ads reminding kids that after eating that giant bowl of Froot Loops and a fistful of donuts, maybe they should go brush their teeth.

Give a Hoot, Don’t Pollute!

PSA Commercials for the environment feated Woodsy Owl. “In the city or in the woods, help keep America… looking good!”

Only you can prevent forest fires!

Take a bite out of crime!