We love Twitter. We love Twitter so much we think you should join Twitter just to use that lovely Tweetmeme button up there to help spread the joy of Gunaxin. But as much as we (Platonically, honest) love Twitter, there are places it doesn’t need to be. Like, say, on a billboard where it might imply your dynamic Action News Team are responsible for gang rape. 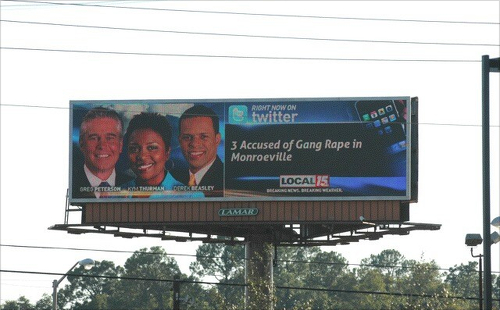 This managed to get the general manager and the news director of WPMI suspended for a week. In a total coincidence, this is near Monroeville, PA, where they shot “Dawn of the Dead”. No, the good one. Zombies and rapist news teams…what IS it with Pennsylvania anyway?