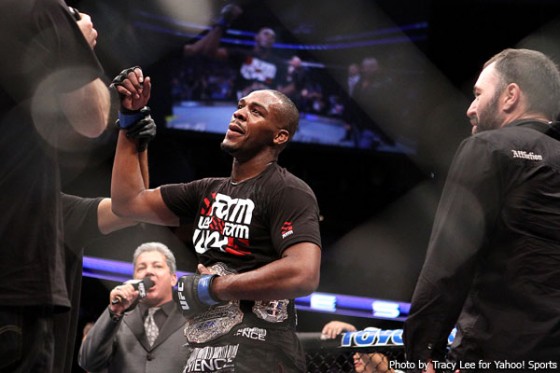 The winner, in more ways than one...

I had the pleasure of going to UFC 128. What’s that you say? Whoa whoa whoa. Let’s not get ahead of ourselves. I’m not important enough to get credentials and my pretend best friend forever Ben Fowlkes denied my requests to hang out in the slums of Newark with me. So I went as a civilian.

This is not a bad thing at all, but of course it isn’t an awesome thing. I went to UFC 111 for GSP v. Hardy/Carwin v. Mir as well, and I think I liked that card a little better. Probably because of the dual title fight, which is always amazing.

Now I bring this up because this is my second time in the shitty ghetto of Newark and the Prudential Center and I’ve seen the barbarians that live around there and first thing is first… that Jones v. Mugger story sounded really fake. I think Jones is probably the toughest man(boy?) on the planet but fighting crime is a different story. He’s not Batman.

In a cage, Jones is probably the best fighter the UFC has. I’m including all divisions. I think Jones’ height, reach, strength and unique style make him a formidable opponent for any man, despite weight.

But I think if you take what Jones is… add in an unpredictability in the striking game and a very talented wrestling game, how can you beat this kid?

The thing is, you are in a cage. The other fighter is searched and respectful. It’s not like Shogun was going to be strapped when Herb Dean patted him down. I’m just saying that the type of person in and around this Newark arena look like they would be the type to carry a gun.

And lastly, how did NO ONE film this? No one watched this guy come from his car to the stadium? Cameras are on fighters in title matches all the time. Where the hell was TMZ and that shifty Jew-lawyer? I want answers, dammit! I’m a man! I guess, Manswers if you will.

The bottom line is, this was all really convenient that the All-American kid from NY stops a cat-burglar in the slums of Newark, New Jersey and then goes on to win the 205 lb. championship belt right next door to the huge market Dana White and MMA are trying to get into. You see where I’m going with this?

Anyway, the fights were awesome. A lot of questions were answered but they created even more questions. Why? Because fans of violence are impatient. I had to watch this Police Brutality video just to get my fix.

Until next time, Gunaxin readers (read as: tomorrow).