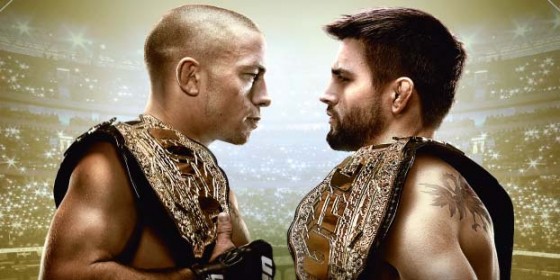 UFC 154 kicked off in the home town of the welterweight Champion Georges Saint-Pierre last night in Montreal, Canada. The fighters took to the center of the Octagon in front of a rabid sold-out crowd cheering (mostly) for their countrymen. We saw a win by disqualification for Patrick Cote after Alessio Sakara was judged to have landed as many of seven illegal punches from top position. The 6’6″ Cyrille Diabate showed the world just how versatile the lanky striker is by picking up the W with a sensational transition and rear-naked choke on a stunned Chad Griggs.

The local boy Mark Hominik and the renowned submission artist Pablo Garza took to the octagon in the first fight of the main card. ‘The Scarecrow’ Garza started the fight with severe back peddling from a fired up Mark Hominik who pressed from the first ring of the bell. ‘The Machine’ Hominick found his timing with ease, but could not punch through the defense of Garza as The scarecrow executed a tight arm bar that Hominick did well to tough out.

Round 2 opened with a capalera spinning kick from Garza that excited the crowd. Both fighters traded blows, Hominick coming off stronger by dropping Garza with a well-placed body shot. The Canadian then received a fist-shaped retort which lacerated the upper eyelid and eyebrow. The next six minutes saw Garza hunt down and use efficient ground and pound until the end of round 3, landing a multitude of different strikes from inside guard.

Pablo Garza picks up the win and Mark Hominik goes home looking like a man who took 170 strikes to the face. 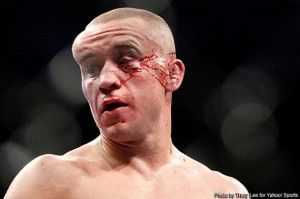 What do you do when plan A fails miserably? Plan B, right? Well Mark Bocek forgot plan B after several of his takedowns were stuffed by an incredibly impressive Dos Anjos, who dominated from the start.

Anjos repeatedly jabbed, pushed off and slammed Bocek with a series of powerful right hands throughout round 2 and 3. Bocek seemed to come more into the fight as his blood poured and Anjos eventually showed signs he may have been involved in anything more strenuous  than a sleep in the past 15 minutes. Rafael Dos Anjos stuffed multiple weaker takedown attempts as the fight wore on and locked up a Kimura against the cage on an upturned Bocek, who battled through the pain to squeak out the backdoor. 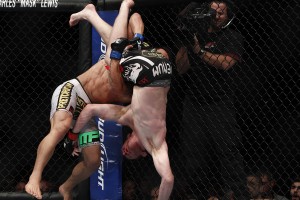 Bocek showed tremendous heart by gutting through a series of submission attempts from top position, but was ultimately ineffective. Dos Anjos closed the fight with back kicks and traditional weaving in front of a tired Bocek. RDA picks up his third win in a row and now stands out as one of the top contenders at 155 lbs.

Francis Carmont versus Tom Lawlor wasn’t the most exciting fight ever, again seeing the 15-minute time limit out. Twitter and The Bell Center were not shy in showing how they felt, jeering and booing while the fighters took turns pushing each other against the cage with intermittent segments of failed and half-hearted submission attempts. 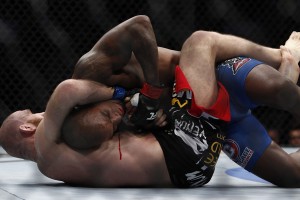 Carmont won via a split decision for being taller it appeared. If Lawlor ever gets tired of MMA he’ll have an easy time adjusting to the career of a mouth doctor as his personal highlight of the night was demonstrating how to squeeze a pair of tonsils to death via an arm-in guillotine choke, producing a trickle of blood from Carmont.

Martin Kampmann, Johny Hendricks was the penultimate fight and if the last fight was a snorefest, this fight was a hand grenade in the face.

It is rumored that Johny Hendricks is required  by law to carry his left hand in a holster as well as keeping a permit on his person at all times. Don’t believe me? Check out what he did to Jon Fitch:

Forty-six seconds in Johny ‘Big Rig’ Hendricks  showed just why I made that fact up and proves wholeheartedly that he is the biggest power puncher in MMA. The right hook dummied Kampmann, allowing the straight left to land flush on the chin, throwing the Dane across the octagon and into a 40-second snooze — knockout of the night contender without a shadow of a doubt. Hendricks puts his name forward for a title shot with that incredible, thunderous left hand.

The main event was the reason we (I) stayed up late. Welterweight Champion Georges Saint-Pierre put his title on the line against interim champ ‘The Natural Born Killer’ Carlos Condit. The noise was deafening, thousands of Canadians making themselves heard for their guy coming back from a terrible ACL injury that has ended the career of other athletes. GSP made his return in spectacular fashion.

They touched gloves, took their corners of the octagon, and then the bell.

I never say this, but this was one of the best fights to ever take place in the UFC. Chants of “GSP, GSP, GSP!” rang throughout The Bell Centre as Carlos Condit pushed the fight early on with high kicks. St-Pierre offered a powerful jab which leads into a specialty take down. The ground game and the sheer grappling skills of St-Pierre made it almost impossible for Condit to get a foothold in the match from bottom position and elbows and punches rained down from half guard, a position former champion Randy Couture preferred when attacking from the top. Blood began to pour late in the first round as a well-timed short elbow grazed the eyebrow of Condit. 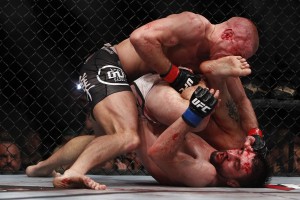 The second round saw Carlos throw a flying knee, narrowly missing the champion who answered with a right jab, a staple of GSP’s arsenal. The round culminated in heavy pressure from GSP, who showed no signs of the lingering knee problem as he pressed the fight from inside Condit’s guard again. Condit’s cut began to flow down onto the shoulders of the interim champion.

Round 3, and a revitalized Condit threw caution to the wind and through blood smeared vision managed to set up a near perfect combination that ended in a left high kick. GSP took the kick and hit the mat. Both fighters then scrambled for position, but Condit managed to pound consciousness back into GSP for the round to end with the Natural Born Killer on his back. 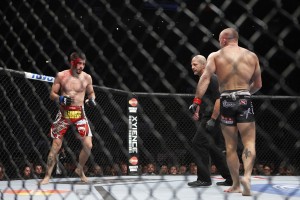 Into the championship rounds. The chants kept coming, but this time there was an admiration for the steel-hearted Condit whose intent to leave everything in the octagon ignited the fans. Round 4, GSP timed a perfect takedown after Condit again narrowly missed with right hand. GSP battled and used more of his grappling skills to shove Condit against the cage; both fighters were bloodied and tired but kept pushing the pace and never once required a stand up. A failed Kimura attempt by Condit allowed the Canadian to posture up and slam the submission attempt away before the round ended.

Round 5, The Bell Centre rocked as the two fighters met each other in the center f the ring. GSP went for another takedown, but Condit turned and side kicked the effort away, creating space to step away and meeting St-Pierre with a flurry of strikes.

The Champion eventually got the challenger down, making it 7/6  for successful takedowns. Condit realized that he was losing the fight and made a last gasp attempt to stand by hip escaping from half guard, but in turn gave up his back. A bloody and sweaty St-Pierre could not capitalize on the mistake and with 14 seconds to go, Condit cranked the elbow and clamped his wrist around both of Pierre’s arms for two Kimura attempts. 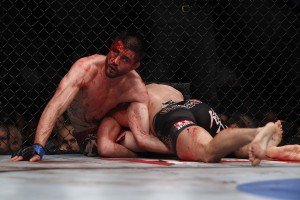 After a grueling, gritty and epic 25 minutes of action, Georges St-Peirre retained is title via a unanimous decision (49-46, 50-45, 50-45). He hailed Carlos Condit as his toughest opponent and that the loss would only serve to enhance him (Carlos Condit) as a fighter. St-Pierre then disclosed to elated fans that he is open to the possibility of a catch-weight fight against Anderson ‘The Spider’ Silva.

This is a great time to be a Mixed Martial Arts fan.

All images via mmafighting.com