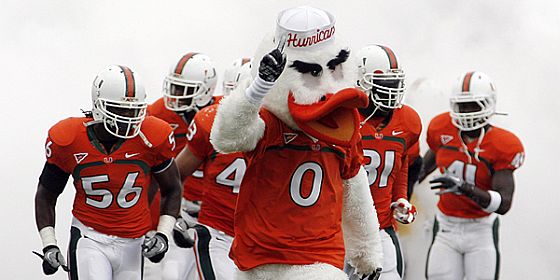 The NCAA, forgoing rules of evidence and fairness, has issued an ultimatum to former University of Miami players. NCAA enforcers have notified former Miami football players that if they do not cooperate with investigators that they, and the University, will be considered guilty in the bribery scandal involving former booster Nevin Shapiro. The letter, sent to the players’ attorneys, gave the athletes until Friday to contact NCAA officials.

“The purpose of this letter is to apprise you that the NCAA enforcement staff is requesting to schedule an interview with your clients regarding their knowledge of or involvement in possible NCAA violations concerning the University of Miami, Florida, football program.

“Interviewing your clients is important in order for the enforcement staff to conduct a thorough investigation, and both the staff and the institution request you and your clients’ cooperation in this matter. However, at this time, all attempts to schedule and execute interviews with [blank] have been unsuccessful. As a result, this letter serves as a formal and final request by the NCAA enforcement staff for interviews with [blank] to be completed by Nov. 23, 2012.

“If we do not hear back from you or your clients by that time, the staff will consider the non-response as your client’s admission of involvement in NCAA violations. You may contact me at [blank] in order to arrange this interview. Your assistance in this matter is appreciated.”

The NCAA doesn’t have any actual authority over former players so any assumptions of guilt will be used only to increase the sanctions faced by the school. This is a broad overreach of NCAA power, as they appear to be taking the words of a convicted felon, Nevin Shapiro, a former equipment manager, and a lack of cooperation by disinterested parties as proof of guilt. Some of the players potentially involved include current NFLers Vince Wilfork, Jon Beason, Antrel Rolle, Devin Hester and Willis McGahee. Any punishment handed down by the NCAA will be in addition to a self-imposed bowl ban that Miami issued last spring.