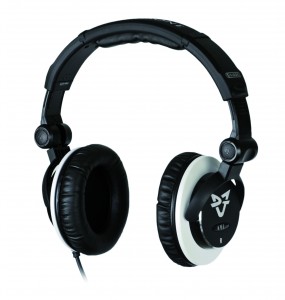 I’ve been DJing both in clubs and on the radio for about 12 years and one thing that has always been a struggle was finding a pair of durable, great-sounding headphones that didn’t completely empty my wallet.

Having never heard of the German company Ultrasone before, I was happy to give the DJ1 headphones a test-run. The DJ1s boast several features, my favorite being the S-Logic natural Surround Sound, but not for it’s surround sound-replication, more for the 3-4 db reduction in sound pressure levels, which means my much-abused ears get up to 40% more of a break from the same sound than I’d get from my regular cans. Basically, you hear the music at the same volume, but with less sound pressure that damages your hearing.

My other favorite feature about these are that after about 40 hours of use in the booth, the earcups got more comfortable, while the rest of it still feels insanely solid. I’ve dropped it, bent it, pulled every part of it and generally put it through the amount of abuse it would probably go though in a year, and the DJ1s showed no ill effects. In comparison, my old Sonys would have had the earcups come off, had the headband stretched out and the cable tangled umpteen times.

The DJ1s also feature a longer length of straight cable until about the halfway point where it goes into a tight coil, then back to straight, which is nice to avoid it catching on equipment and getting tangled up in the bag. Although it probably wouldn’t be a problem anyway, since the carrying bag is nice and roomy, another place cheaper headphones get chincy.

Ultrasone also claims that their Ultra Low Emission shielding protects your noggin from 98% of all electromagnetic radiation that all headphones emit. While there’s been debate on whether or not these waves are harmful to us or not over long periods of time, I’m more than happy to err on the side of caution.

This would be a poor review of headphones if I didn’t talk about sound quality and I’m happy to report that they simply sound great. Just as good as headphones I’ve tried and have paid hundreds more for.

In addition to great clarity, all your DJ headphone standards are also included, like earcups that swivel and also fold up if you prefer to cue up your music that way as I do.  Get more info on the DJ1 headphones at Ultrasone or pick them up from Amazon with free shipping for $179. A recommended buy.