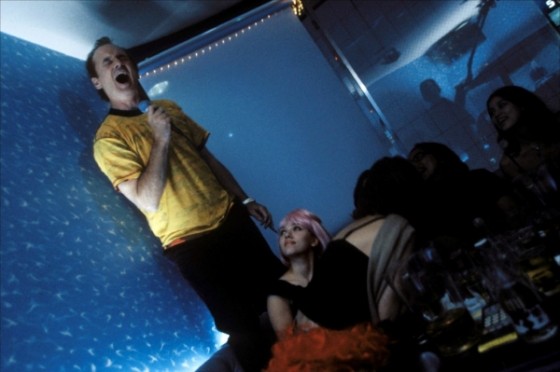 There has been no shortage of big screen bashes throughout the years. Movies such as Animal House, Weird Science, Can’t Hardly Wait, Dazed and Confused, American Pie, Superbad, House Party, Sixteen Candles and Revenge of the Nerds feature some of the biggest, best and baddest galas in the history of the medium. But those aren’t the only cinema celebrations to leave an impression. Here are ten underrated movie parties worth crashing.

If you didn’t attend a rave in the mid to late nineties, you missed out on some wild times. The Christmas Eve Mary X-MAS blast had it all: a giant Santa Claus, frenetic dancing, oodles of neon and drug dealer Todd Gaines hunting down resourceful young Ronna, who ripped him off for twenty hits of ecstasy.

Karaoke in Tokyo
Lost in Translation

Watching Murray’s Bob Harris and Scarlett Johansson’s sexy Charlotte serenade each other and a room full of drunk Japanese sounds like the perfect way to spend a Friday night. Or any night for that matter. It’s an intimate, yet entertaining scene.

It’s not every day you have a bird’s eye view of a massive monster attack in New York City. And let’s be honest. Rob’s going away gathering was pretty lame until the beast from outer space showed up and beheaded the Statue of Liberty.

’80s teenage romantic comedies were always good for a memorable party. In this one, geek turned chic Ronald Miller is exposed as a fraud in front of all his “friends” by beautiful blonde Amanda Peterson. Plus, there’s plenty of random hookups and a douchebag jock  pretending to be a wine connoisseur.

As far as getting out of jail parties go, this one wasn’t very festive. It started with Billy insulting a tempermental Tommy and ended with Tommy and Jimmy stomping a hole in Billy’s face. Nevertheless, it would be kinda dope to hang with mobsters. As long as it didn’t get us killed.

An opportunity to score with innocent, impressionable Amish cuties should be on every dude’s list of things to do before attending the great gig in the sky. Enter rumspringa — the period of time when sixteen-year-old Amish are allowed to let their freak flags fly.

“Kinky Kelly and the Sexy Stud.” It’s inter-species erotica at its finest. Admittedly, this one was beyond disturbing, but it would qualify as an awesome story to tell at other parties. And the smokin’ hot Rosario Dawson drops by unexpectedly, which makes up for the man-on-donkey action. Right?

Winston Wolf was the man, and not just because he solved “The Bonnie Situation.” No, he was the man because he left an 8am black tie gambling party to assist Vincent and Jules with their problem. Stealing an invite to this exclusive engagement would be a dream come true.