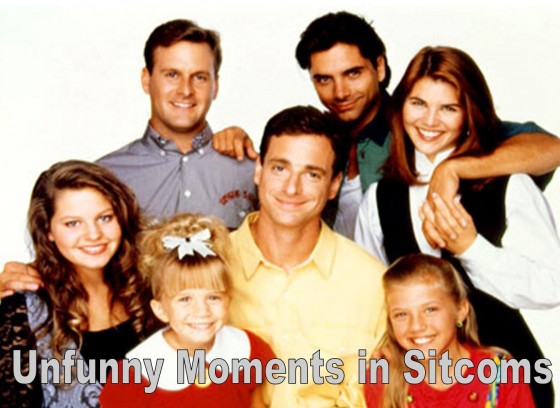 Sitcom basically translates to situation comedy. Networks love situation comedies because they usually employ the same few sets over and over and everyone loves a comedy. Well, if that’s true then how do you explain this group of what may well be some of the most bizarre scenes in television history?

This scene is just harrowing to watch. The man has control of the situation and Edith is terrified. Actress Jean Stapleton does some of her best acting and the cheer when she escapes its electrifying. All In The Family was apparently fond of rape as Gloria, Archie and Edith’s daughter, actually does get raped in an episode where they try to make it look like she was asking for it when she goes to court.

Phil Hartman Dies on News Radio (And for real)

This was just unfortunate. Sure, he might have been a jerk in real life, but Phil was a funny, funny man. It was just tragic. Apparently, in the fake world of sitcoms if you die in real life you die there too. A real shame.

Everyone mentions how Alex getting all whacked out on speed was bad. Wasn’t it equally bad that his sister could score such high quality drugs in such a short period of time? Why didn’t anyone question that?

Jean Stapleton was so connected with this series that many people thought that she had passed away. Why else would they take our beloved dingbat away from us? This might qualify as one of the truly saddest moments in television history.

Anorexia is a serious issue. Sitcoms are the polar opposite of serious issues. Why do they continue to address these things in this format?

WKRP In Cincinnati – Who concert tragedy

I thought this clip would be a perfect example of why some things should not be made light of. This is actual footage of what happened at a Who concert in Cincinnati. It addressed the potential dangers of stadium seating, but lots of places still practice this for concerts. Plus, I looked everywhere for a clip and couldn’t find one.

Now I know what you’re thinking. These are all popular sitcoms that just lost their way. But there has to be that one truly unfunny sitcom that never worked.