The Unwatcha-Bowl: Jets vs. Chargers

The NFL’s Week 16 schedule features some intriguing match ups with serious playoff implications. While the Steelers/Bengals  and 49ers/Seahawks games could help determine divisional winners the Jets/Chargers game features two teams that can’t get to the off-season soon enough.

The Jets are third in the league in turnovers behind only the hapless Eagles and Chiefs. Jets fans won’t have Mark Sanchez to push around any more; and they’re thrilled about it. The struggling fourth year QB has been benched after his five turnover melt down last Monday in Tennessee. Sanchez will join Tim Tebow on the New York sideline while former Alabama star Greg McElroy gets the start. The 24 year-old McElroy has thrown a grand total of seven passes in his two-year NFL career. The best thing anyone can say about the youngster at this point is at least he’s not Mark Sanchez. 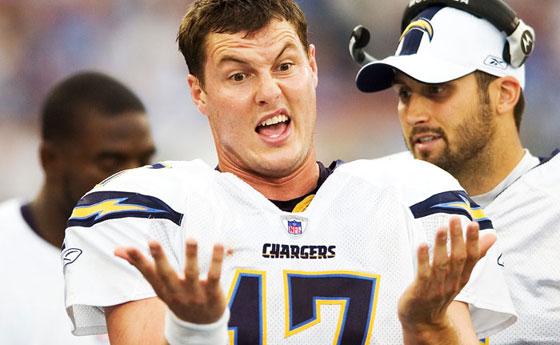 The Chargers are an unmitigated disaster. It seems that Norv Turner has finally coached his way out of San Diego, three years too late for Chargers fans. Philip Rivers has regressed from an All-Pro QB to a human turnover machine over the past few seasons. After throwing 20 interceptions and losing five fumbles last season, Rivers seems intent on topping himself this year. He’s already tossed 15 picks and lost seven fumbles with two games left on the schedule.  Some may lay the blame on Turner for Rivers’ failures, but I blame myself. The quarterback simply hasn’t been the same since I traded for him in my fantasy league two years ago. I offer San Diego our sincerest apologies.

The Chargers will be traveling cross-country to play New York in an early game on Sunday; a situation that hardly ever works out well for the West Coast squad. San Diego will also be without RB Ryan Mathews and WR Malcom Floyd as the pair was recently placed on Injured Reserve.

While Turner is almost certain to be fired at season’s end the fate of Rex Ryan is less clear. Jets fans may be excited by the prospect of getting an extended look at McElroy but this quote from Profootballzone.com should have them worried:

“Everything that I’ve learned at this position in this league has been from Mark,” McElroy said, in comments distributed by the Jets’ PR staff.

Ugh. I get that McElroy wants to give a shout out to his beleaguered teammate but pointing to a guy with 50 turnovers in his last 30 games as your mentor is a PR disaster. Rex Ryan and Jets fans everywhere better hope that McElroy didn’t pick up the intricacies of the patented Sanchez buttfumble.

If watching this doozie on the boob tube doesn’t satisfy your need for crappy football the good news is that more than 3600 tickets are still available according to Stubhub.