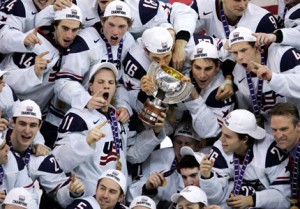 The United States defeated Canada in the World Junior Hockey Championship this evening, to take only their second title ever. After losing a 2 goal lead in the final minutes of the third period, the United States salvaged the win with an overtime goal by Defenseman John Carlson. From NHL.com :

John Carlson scored his second goal of the night 4:21 into overtime as the U.S. upset Canada 6-5 to win its second-ever World Junior Championship gold medal. Carlson’s shot from the circle to the right of the Canadian net beat Martin Jones to end Canada’s five-tournament win streak and give the U.S. it’s first WJC gold medal since the Americans beat Canada in the 2004 title game in Grand Forks, N.D.

If you watch that replay closely, Carlson opens up as if to pass, and never looks towards the net until the shot is already heading off of his stick. John Carlson was a 1st Round Draft Pick for the Washington Capitals in 2008, and currently plays with the Hershey Bears of the AHL. He has played 3 games at the NHL level this season, but still qualifies for the Junior Hockey Championship since he will not turn 20 until January 10th.