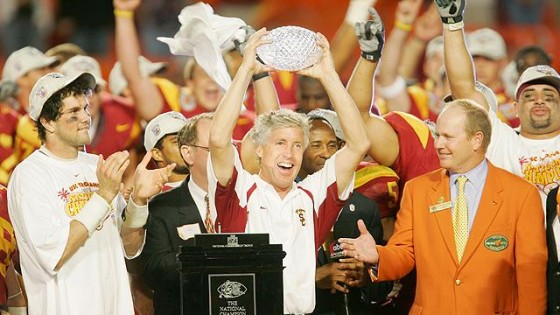 One of the major college football headlines in the past 24 hours was the University of Southern California’s football team getting stripped of it’s 2004 Bowl Championship Series title due to the in-eligibility of running-back Reggie Bush.

So with that, the 2004 BCS national championship will remain a big fat empty space in the NCAA rulebooks and forever shaming the University of Southern California. At least, that’s what the NCAA/BCS would like us to believe.

I’m not a fan of revisionist history and that’s essentially what this ruling is. Any college football fans in the year of 2004 will remember that USC beat Oklahoma in the Orange Bowl by a rather wide margin and removing a title isn’t going to prevent people from remembering that season, since we have the joys of the interweb and YouTube to prove to the world that the 2004 BCS title was given to Trojans.

Why did the NCAA feel the need to strip it? I understand the logic that the team needs to be punished if someone breaks the rules but the entire team shouldn’t be punished for one player’s misstep. Bush has already been stripped of the Heisman Trophy that he won but I guess that’s not enough in the eyes of the NCAA. They want to make an example of this team and show the world that if you are going to cheat, you are going to be punished to the full extent of the law.

My issue is within the College Football fraternity, cheating runs rampant and whether or not the NCAA likes it, they are making a boat-load of money from these players and on some level, some of them should be compensated. This isn’t a question of whether or not student athletes should be paid, but it seems a little more two-faced to say that players shouldn’t be receiving money or compensation when the school is making a profit on them.

For USC, if Reggie Bush was able to get a decent-paying job while at USC or received some money to help out his family and the NCAA allowed it, he probably would have done it. However given the situation, Bush needed the money and did he could to help his family at the expense of his football team. That’s the sad truth in the end; he did something to help one family and ended up hurting another.

For the NCAA, revoking titles or conference championships haven’t really done anything to change the culture. We still look at the Fab Five in Michigan as one of the best teams to ever play, even though records have been wiped clean. Coaches and players still get in trouble for improper benefits, now at an even more frantic rate.

The NCAA has tried to take away memories that have given them a black eye, the only problem is that it just seems to accentuate their problems even more.