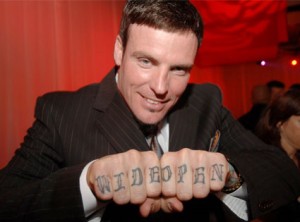 Rob Van Winkle, who to the extreme rocks a mike like a vandal and has been known to wax a chump like a candle is now an official spokesman for Castle Lite- a South African beer that’s better served cold as… never mind.

Once upon a time has beens and even A-list celebrities were able to secretly hawk wears in foreign countries without fear of reprisal (Japan is famous for recruiting Oscar winners to sell jeans and booze.) but thanks to the internet that’s no longer the case. But to be fair, we have no idea what Vanilla Ice’s agent had in mind when they jumped in the car and slammed on the gas to South Africa.

Ice’s handlers aren’t stupid, so we’re guessing this was made to appeal to the nostalgic and ironic, and be honest- who here among us wouldn’t totally get off on Vanilla Ice cooking MCs like a pound of bacon every time we cracked open a Castle Lite? It does sound pretty cool, you know. But don’t take our word for it- check out the hook while his DJ revolves it: