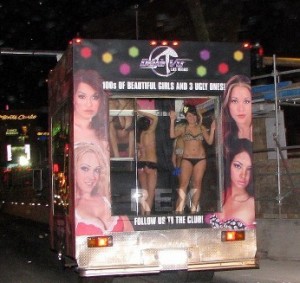 100s of beautiful girls and 3 ugly ones!

Deja Vu Showgirls had a brilliant idea. Place live strippers in the back of a truck and parade up and down the Las Vegas Strip in an effort to lure customers back to its club. Only available from 10 p.m. to 2 a.m., it offered those around a view of strippers dancing around a stripper pole. Sounds like a great idea! Problem was that it was apparently advertising that was too effective.

Yes, even in Sin City people complained. But let’s face it, anyone can see a lot worse if they are wandering the strip at that time of night. The real problem was that it became a safety issue. Cars and limos followed the truck around, and the constant photos and eye-diverting gazes were deemed a traffic hazard. The don’t want some guy distracted and plowing up on the sidewalk in front of the Bellagio. No, that is certainly not a reasonable place to park.

Personally, I have no problem with it. Most men are adept at driving one-handed anyway. It just seems like one huge missed opportunity. Long-live the stripper truck, may these memories live on: