MGM Resorts International is a hospitality, entertainment, and gaming company that owns and operates numerous properties in Las Vegas. Most obviously they operate the MGM Grand, however others in their portfolio include Bellagio, The Mirage, Mandalay Bay, New York-New York, Luxor, and many more. The newest additions to the MGM empire are the luxurious destinations at CityCenter, headlined by the Aria Resort & Casino.

Recently we were invited to get more familiar with the world of MGM Resorts during an epic Vegas Mancation with some of the guys from Men Who Blog. The trip included little tastes of the variety that Vegas has to offer, and very big tastes of some of the best food available on the strip. Honestly we ate so much, that we have decided to split dining out into a separate future feature. What follows are some of our favorite activities in between the times we were eating and sleeping. 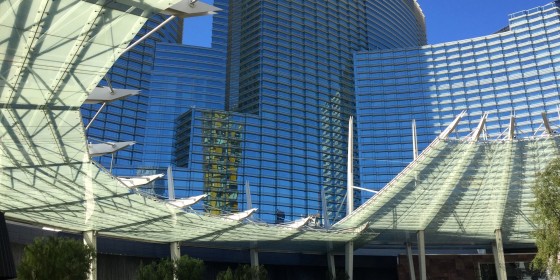 As one the newest resorts on the strip, Aria is also among the most technologically advanced. The facility was specifically designed to reduce energy consumption and along with other facilities at CityCenter has earned LEED Gold Certification from the U.S. Green Building Council. This is the highest LEED achievement of any hotel, retail district, or residential development in Las Vegas and has brought a new level of environmental consciousness to the luxury travel experience. This is accomplished by implementing many modern technologies and practices, but most notable to guests are the programmable smart rooms which automatically adjust curtains, turn off lights and electronics, and regulate the temperature when a guest enters or leaves a room. 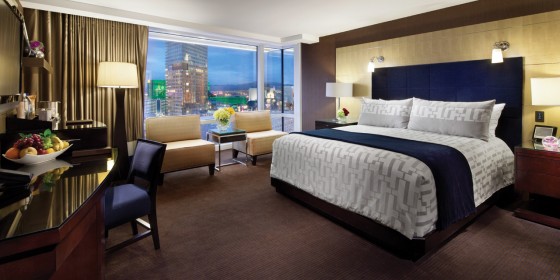 Typically our least favorite part about staying in Las Vegas is the pervasiveness of smoking and the noticeable effect it has on our enjoyment of the experience. While the casino floor at Aria still permits smoking, this modern facility does an outstanding job of mitigating the effect of smoke in the air. The bases of the slot machines actually serve as displacement ventilation units, which efficiently cool guests from the ground up, forcing smoke up where it is ventilated to the outside, and reducing waste of cooling empty space in the high ceilings.

The Ivey Poker Room at Aria 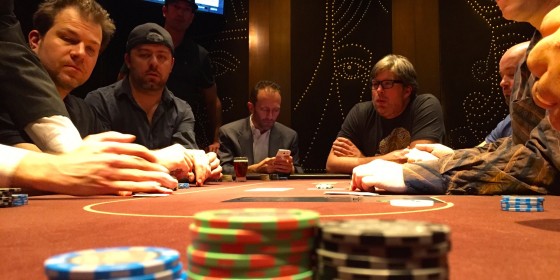 No guys trip to Las Vegas is complete without spending some time at the tables. While we enjoyed a few late night hours at a particularly entertaining Roulette table, a simple poker tournament playing with fake chips in the Ivey Poker Room was a definite highlight of the trip. The Ivey Room is the high-stakes room inside Aria that has served as host for some of the most famous poker players in the world, most notably its namesake, Phil Ivey. Never before has a group of novices been permitted to play a no-stakes tournament at this prestigious table, so we were honored to be the first, and probably last to do so.

We’ve all watched poker on television, and been involved in a local game in someone’s basement, but there is something a bit more intimidating about jumping into a game at a Vegas casino for the first time. The folks at the Aria Poker Room don’t want you to be intimidated though and provided us with a few tips. While they run regular tournaments, you can also jump into a cash game at nearly any hour. The key is to check in with the Poker Host and they’ll sign you up for a table that matches the limits that you are most comfortable with. They’ll also inform you what the minimum buy-in is for the game, before you sit down at the table with fellow players. 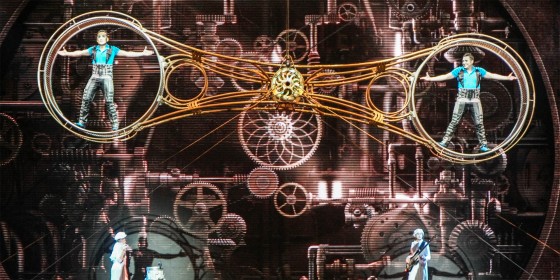 All Zarkana Photos by Jeff Bogle of OWTK.com

Cirque never fails to impress, and this was our clear favorite of the four Cirque du Soleil shows we’ve seen over the years. It was a modern artistic take on a variety show, and each act built upon the previous one in mystifying style. Zarkana is an enjoyable ride, however we do recommend you read more about the show to better understand the story that is being told.

The Shops at Crystals 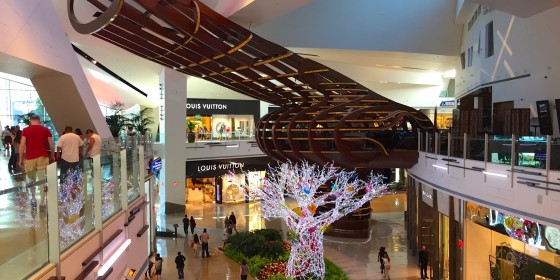 The Shops at Crystals is a 500,000 square foot shopping mall and entertainment district in CityCenter, adjacent to the Aria. It is home to many of the most famous high-end fashion labels in the world, which make it a prestigious destination for anyone shopping for the perfect gift. If you’ve traveled to Vegas for several days with the guys and left the wife at home, Crystals is probably a good place to find something special to smooth that over when you return.

You’ll forgive us however for being distracted from the stores by the gorgeous architecture and installation artwork contained within. The building was designed by famed architect Daniel Libeskind, with interior architecture by the Rockwell Group. The Shops at Crystals is another LEED Gold certified building, but doesn’t sacrifice on design style in order to accomplish its energy efficiency goals. The sculptures and water features alone are worth visiting, even if you’re not a fan of high-end shopping.

Villas at The Mirage 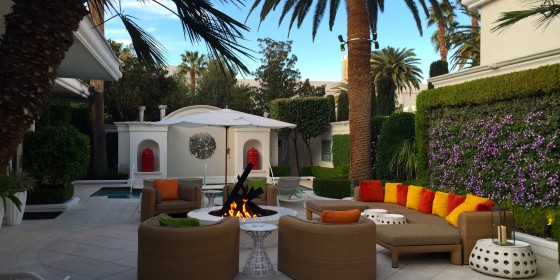 If you’re looking for the ultimate in Vegas opulence, look no further than The Villas at The Mirage. A private gated entrance leads you to a secluded wing of The Mirage, where you’ll be pampered in the trappings of luxury by a 24-hour staff of chefs, butlers and concierge representatives. Rates for a nearly 7,000 square foot 2 bedroom Villa start at $2,250, which is more than the average mortgage payment, however most of us don’t have homes this large or fabulous either.

We were treated to an amazing cocktail reception held in the backyard of a Villa, and left wishing we never had to leave. There are certainly other amazing high-end suites available on the strip, but none can match the outdoor spaces you’ll find at the Villas at The Mirage. Previously reserved exclusively for Casino guests, the Villas are now open to anyone who has the means, and we think they would make a fabulous spot to host a house party.

Aces of Comedy at The Mirage

The Terry Fator theater at The Mirage is home to the biggest names in Comedy with their Aces of Comedy show, where standup comedians come to play in Sin City. Famous comedians come into town for one or two shows at The Mirage, and we were lucky to catch a set from George Lopez on the last night of our Mancation. Lopez is always funny and we appreciated that he worked in some Vegas humor at the beginning before going into some of his more famous bits. Most of the audience were clearly big fans as they shouted out some of their favorite punch lines, which made for an interesting evening. 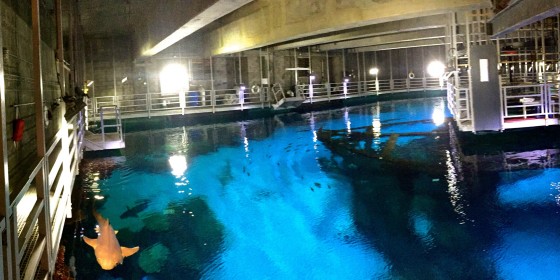 The Shark Reef Aquarium at Mandalay Bay is home to more than 2,000 animals living in 1.6 million gallons of water. It features all kinds of exotic natural wonders, including sawfish, giant rays, endangered green seat turtles, piranha, jellyfish, and the rare golden crocodile. The largest exhibit is the amazing 1.3 million gallon shipwreck where visitors experience an almost 360-degree view, teeming with sharks and fish, through an acrylic tunnel.

We were treated to a VIP behind the scenes look at the Shark Reef Aquarium, and were particularly enamored with viewing the shipwreck tank from above. Seeing all of the technology that goes into operating a facility like that was truly eye-opening. Certified divers can actually take a dip in that tank for $650 with their Dive with Sharks Program. We’ll leave swimming with the sharks to someone else, but we enjoyed learning about the facility. 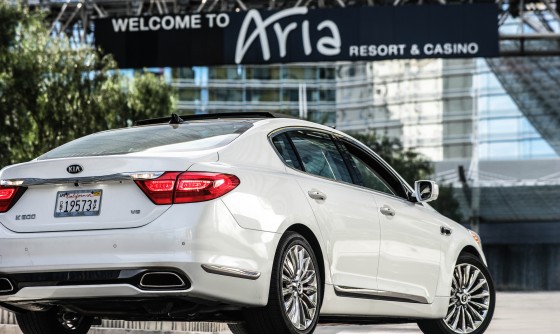 Photo by Jeff Bogle of OWTK.com

Thanks to the folks at MGM Resorts for hosting our Las Vegas Mancation, including everyone we met from communications to hospitality staff who took such good care of us. We’d also like to thank Kia for providing two K900s to help get us around Vegas like Kings, and to James Hills of Mantripping.com and MenWhoBlog.com for organizing this epic guys weekend.

Related Articles from other Men Who Blog :