Sports > Other > Venus and Serena: Two of the Best

Venus and Serena: Two of the Best 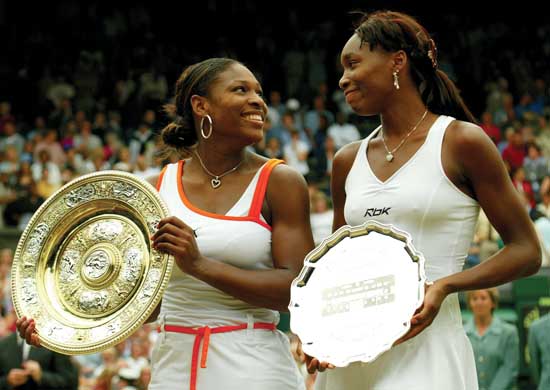 In the last ten years, the world of women’s professional tennis was a realm dominated by Americans, Venus and Serena Williams. Venus and Serena were something that appeared to be dreamt up by Hollywood, two dominate female athletes who were not only fierce competitors but were related to one another.

Since the year of 1998, both of them combined to win 48 Grand Slam titles in singles and doubles. A number that is mind-boggling to say the least but this year at Wimbledon, neither of them are going to add a Grand Slam singles title to the list as both of them fell in the fourth round of the tournament to lower ranking players.

Looking back on their careers, it’s amazing to note that both of them have been dominate for so long, that even sports writers began coining terms to describe how dominate they were. In the year 2002-03, when Venus pulled wins at all the Grand Slam events it was dubbed, “The Serena Slam”. When an event like Wimbledon or the US Open started, the sports media talked about Serena/Venus versus the field of their competition in regards of who would make it to the final.

The Williams sisters displayed how well the game of power tennis could be played at the highest levels. They mastered the art of playing mind games with their opponents. When you faced a Williams sister, you didn’t know where exactly the ball was going to end up but it was going to play to their advantage and it was going to be hit hard.  In some cases, matches would be decided before their opponent had even stepped onto the court and that boggles the mind considering tennis is one of the sports that every opponent appears to be on an equal ground.

The pair will forever be linked in tennis history as the two women who helped move the sport to a new generation of fans who wouldn’t have watched women’s tennis without them in the first place. Although both of them have dealt with personal tragedies and injuries, they never once let up during a tournament or let it get the best of them where others might have. Even though we will not see either of them in the 2011 Wimbledon Final, the legacy they will leave the game is something that we might never see again and speaks to how great these women were at the highest levels of the game.