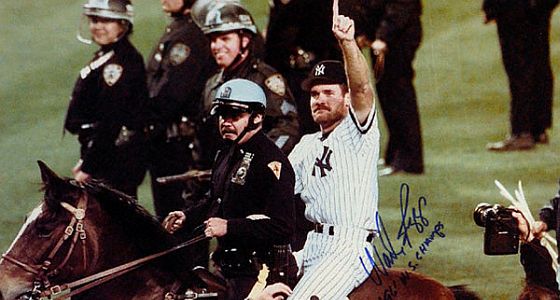 Wade Boggs might be best known for his on-field career, where he his .328 over 18 seasons and earned his way into the Hall of Fame, but his legacy includes far more than just baseball. Stories and rumors about Boggs have followed him since his early days in the minors, and he has built a Bunyonesque legend around himself. There were the odd superstitions, including his need to eat fried chicken before every game and take batting practice at the same time every day. There was the admission (in third person) to being a sex addict after being publicly accused of having an affair. There is the still impossible to believe story of the 64 beer road trip, which has been disputed but never put to rest. And there was the iconic picture of Boggs, mounting a police horse to celebrate the Yankees World Series win.

Adding to those stories comes the newest chapter in the legacy of Wade Boggs; dancing. Caught on the local Fox Sports channel’s camera attending an Oklahoma City Thunder game, Boggs let the music overtake him, and just started dancing. We can’t see what is happening from the waist down, but we’re guessing this was a whole body groove for the Hall of Famer. Beer was likely involved.