We all know that Shane’s Shaggin’ Wagon is a Hyundai Tucson, but product placement opportunities in the Zombie Apocalypse are becoming more difficult as the seasons roll on. Walking Dead fanboys would be very quick to point out if a 2014 Hyundai Tucson were suddenly to appear on-screen in a show that began with the world ending in 2010. But what about going the other direction, and bringing The Walking Dead to the car? 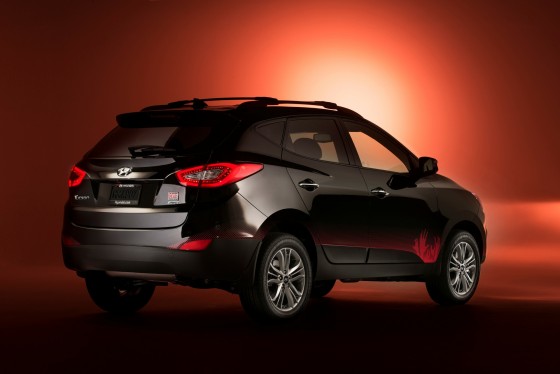 Starting today, Hyundai’s “The Walking Dead” Special Edition is available in dealerships. It’s obviously a very limited release, and it seems to have more of a connection to the graphic novels than the television show, but it’s still bad ass.

This limited-production special edition captures all the iconic trappings from the hit series, sure to satiate its most dedicated fans with an exclusive graphics package, badging, floor and cargo mats, and even a backpack-style zombie survival kit. See your Hyundai dealer before you’re dead!

This is the latest development in the partnership between The Walking Dead and Hyundai, which previously saw the release of the Zombie Survival Machines and the Walking Dead Chop Shop. The graphics package is tastefully done, but we wonder if it has the impact that true Walking Dead fans would like in a Special Edition vehicle. When the Zombie Apocalypse comes, practicality and re-sale value be damned, we’re going to want a spiked cow-catcher mounted on the front of our Hyundai!