Media > Television > Who Does Negan Kill with Lucille in The Walking Dead S7 Premiere?

Who Does Negan Kill with Lucille in The Walking Dead S7 Premiere?

Rick Grimes tells Negan after watching him slaughter one of his closest friends with Lucillle in the latest sneak preview of the upcoming The Walking Dead Season 7 Season Premiere.

The sneak peek into the hit AMC show’s season premier has left fans searching for even more clues as to who Negan brutally murdered with his weapon of choice, a baseball bat covered in barbwire named Lucille.

This got us thinking, who actually died at the end of the season six finale earlier this year? What are the odds for each of the characters involved in the final scene? Who makes the most sense? What evidence is there that proves one person died, or maybe more? Let’s take a look at the list of all the evidence to construct a list of the most likely characters to reach their final moments on the show come October 23rd.

Let’s start off by reminding everyone who was not present when Negan arrived with Lucille. In fact, there were seven major characters who were either back in Alexandria or discovering a new area called The Kingdom. The characters not present were: Carol Peletier, Morgan Jones, Tara Chambler, Father Gabriel Stokes, Enid, Spencer Monroe, and Baby Judith.

The Death Lineup (From Least to Most Likely) 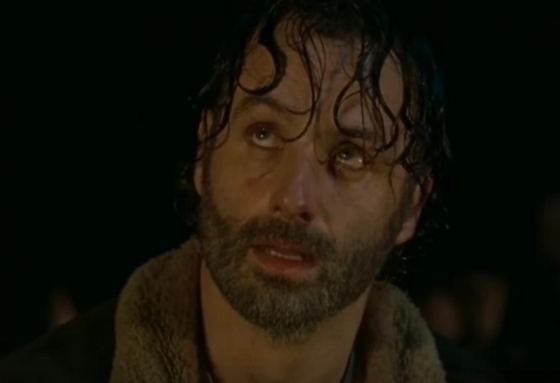 After seeing the latest sneak peek of the upcoming season 7 premiere, it is obvious that Rick survives the wrath of Lucille being as he is still alive after the beating occurs. It is as simple as that. Odds were always very low that Rick was the one to die but this confirms it. Also, television history has taught us many lessons but the most important one is to never piss off your fans by killing off the most popular character on the show. 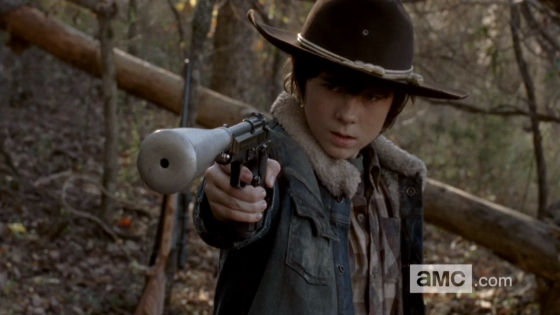 In the final scene of the season 6 finale, we watch as Negan prepares for the final death of the year with a close-up POV angle from the eyes of the victim. Right before he swings the bat, he says to his thugs, “Anybody moves, anybody says anything, cut the boys other eye out and feed it to his father, and then we can begin.”

He is referring to Carl’s eye injury and that line alone shows us that Carl is not the victim because why would you follow this order if he was beating the kid to death with a baseball bat? 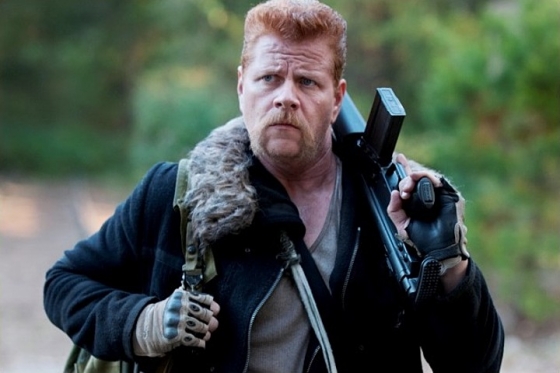 During an interview with Popsugar, the online entertainment website, Michael Cudlitz was asked about the death of his character in the comics compared to the television show and his response was long and winded. But he did offer up one sentence that all but confirmed his survival. Michael said, “Now we get to see what a world with Negan and Abraham both in it will be like.” Then again, he could be messing with us, that is something that is known to happen with finales like this one. 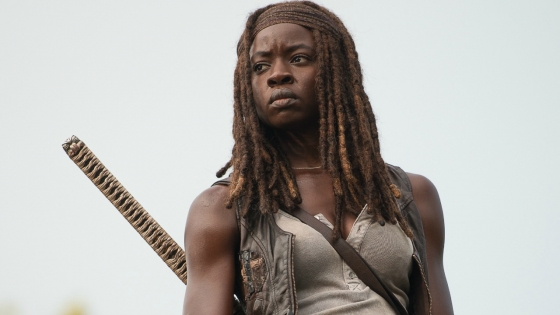 There is no actual evidence so far that clearly releases Michonne from being Negan’s first victim on the air. However, since we are using the comic books as a reference point too, we can say that she isn’t going to die from Negan’s bat. If you read the comics, you understand how important she is and without her, or Andrea, the story lines to come are going to be so far off the beaten path, you will not be able to make sense of any of it.

The television show and the comic books are two different entities and Greg Nicitero has made sure the two are separate but without her, there is just too much missing and that is why her odds are extremely low. 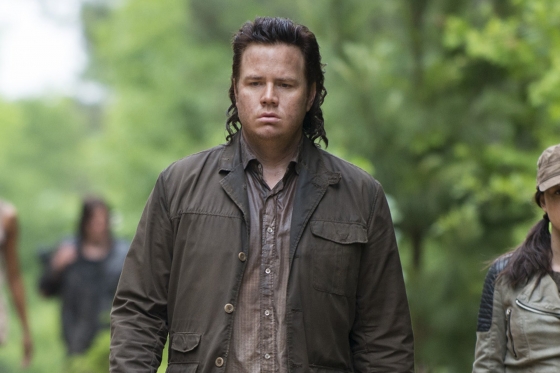 Without getting lost in the woods here, let’s explain this one.

In the final POV scene with Negan, the lighting on Negan’s face is on his right, not his left. From the way the vehicles were parked and how the lights were pointed, if it was Eugene, it would have to be coming from head on, not to the left of his face.

This is confirmed with the sneak peek video that shows the blood slashed across Rick’s face, on his right side. Eugene was on his far left. 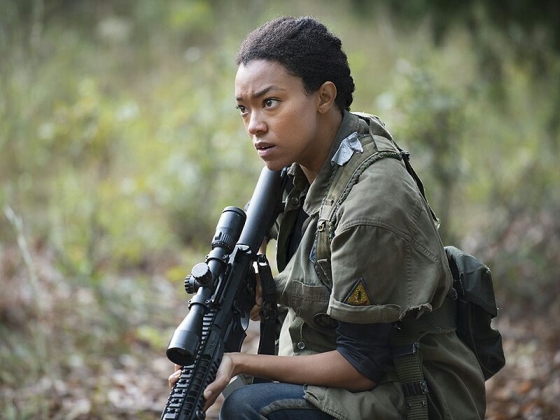 If Abraham lives, so does Sasha. There is an important connection between these two characters and their relationship could help replace the death of another falling character, based on the comic books upcoming plot lines.

There are many reasons but the most important remains that Sasha is also not situated to Rick’s right so the blood splatter could not possibly come from anyone on his left. 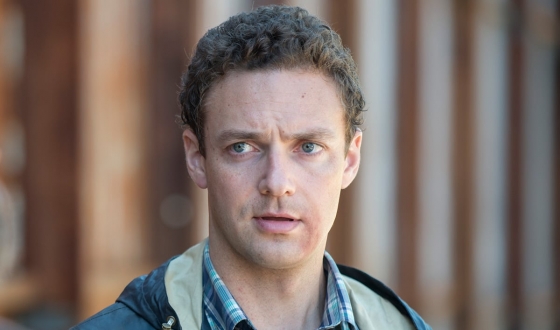 No offense to Ross Marquand but if The Walking Dead makes its entire audience waste hours of their time trying to solve this mystery only to give us the death of a supporting character who has only been around for two seasons and does not even have a last name would be a bad, bad move. It could kill the show’s future. He survives simply because the show creators aren’t that dumb. 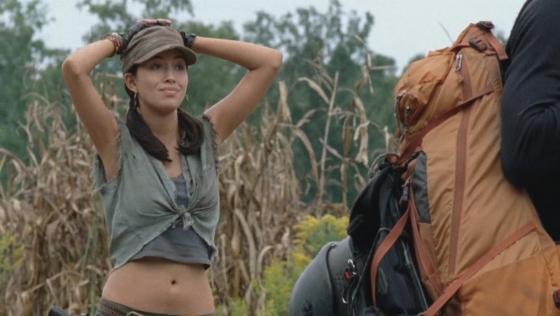 No one wants to see Rosita die, not ever. But the fact remains that the show does things we don’t always understand and sometimes likes to shock us with a misdirect before hitting us hard with another blow.

So maybe they use Rosita as a ploy to have us drop our guard down just long enough for a second beating to take place. 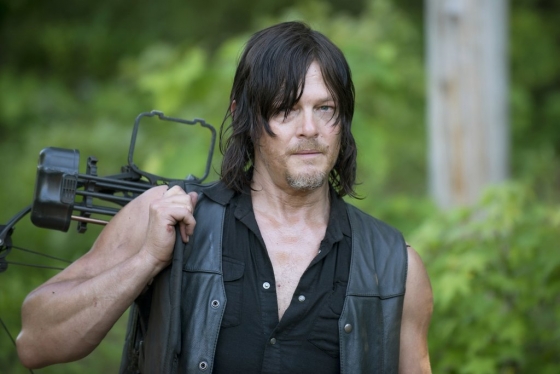 Daryl Dixon was never in The Walking Dead comic books but has become one of the biggest stars on the show. But sadly, his story arc has come to an end. It is just that simple. There is not much left from Daryl and the show has even cut back on the number of scenes he has been in over the past few years.

If there was a time to eliminate Daryl Dixon from the show, it would be now. Otherwise, he is going to be around for awhile. 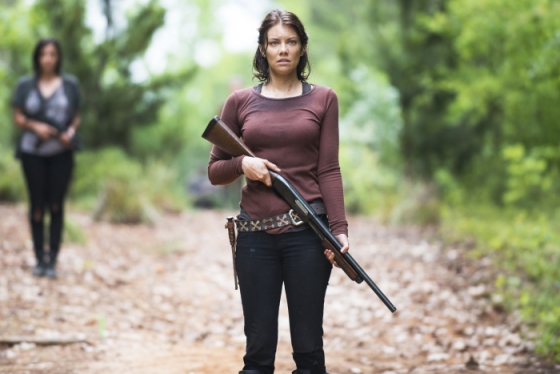 No one is claiming to be Dexter or anything but from the sneak peek video we posted here, we are given a huge hint by the show’s producers with the blood splattered across the right side of his face.

This is assuming Negan chooses his victim and immediately begins the beatdown. He could have moved them after selecting the person to center them for all to see. If that is the case, it is more than likely going to be… 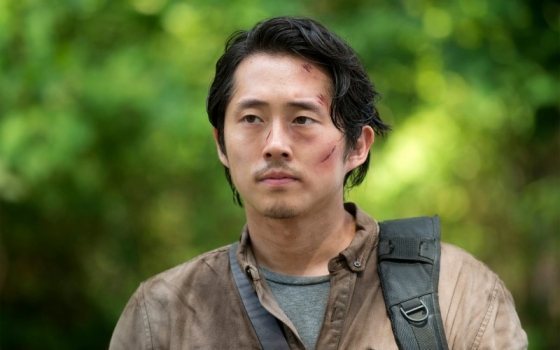 Glenn! Look, in the comic books, we already know who gets brutally murdered by Lucille. It’s Glenn. But fans aren’t sure if they would even enjoy it knowing we had to spend the entire summer waiting for the biggest cliffhanger in the show’s history only to find out it is exactly who we thought it would be.

He is the most obvious choice thanks to the comic books but the producers have also teased us all summer that it just might be Daryl or Rosita. Since we aren’t 100% certain yet, all we can say is that the best odds of who died belongs to Glenn.