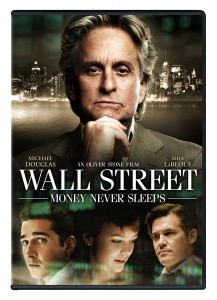 Gordon Gekko is back and you can see him on Blu-ray and DVD on December 21st. That’s the day Wall Street: Money Never Sleeps is available wherever movies are sold.

The movie starts up where following a lengthy prison term, Gordon Gekko finds himself  trying to get back to the world he once ruled, while looking to formulate a relationship with his daughter, Winnie. Gekko creates an alliance with her fiancé, Jake (Shia LaBeouf). Then Jake and Winnie start to realize that was a bad move on their part. If you were a fan of the original Wall Street then you will dig the sequel. Check out the trailer below.

Some of the bonus material on the DVD and Blu-ray is a conversation with director Oliver Stone and a special featurette looking at the real Wall Street. You can win a DVD copy of  Wall Street: Money Never Sleeps by following us on Twitter! If you want it now well you can always purchase the Blu-ray or DVD at Amazon.com.