Most people know Wallace and Gromit from their successful feature length film, The Curse of the Were-Rabbit. However, animator Nick Park has been working with these two characters for 20 years now. In celebration of that 20th Anniversary, Lionsgate is releasing a new Blu-Ray set, and the latest animated short :

Wallace & Gromit™: A Matter of Loaf and Death 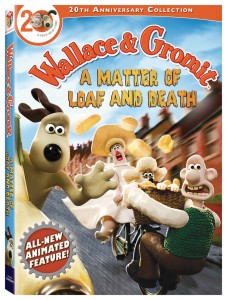 A “toast” to the return of the British icons Wallace & Gromit™! Rolling out their first half hour adventure since 2005, the hilarious duo is back, brought to life through seamless stop-motion animation and brilliant storytelling from Oscar-winner Nick Park. The highly anticipated Wallace & Gromit ™: A Matter of Loaf and Death arrived on DVD Tuesday, September 22, 2009 from Lionsgate and HIT Entertainment. Winner of the Short Animation 2008 British Academy Film Award, this all new adventure features all of the classic ingredients of a great murder mystery – suspicion, rivalry, love, intrigue and heroism – and is topped off with a large helping of loyalty and friendship, cooking up all you “knead” for fun family viewing! 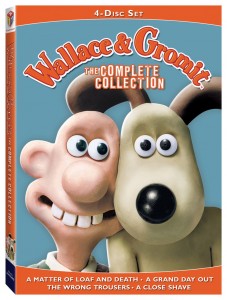 They’ve been to the moon, foiled a major diamond heist, broken up a sheep rustling scam and even baked bread in their own bakery. And now, for the first time, fans of the much loved British icons – Wallace and Gromit can enjoy The Complete Collection of multi-award winning short films on a stunning Blu-ray DVD from Lionsgate and HIT Entertainment. Created and directed by Nick Park, Wallace & Gromit: The Complete Collection includes all four of their award-winning films: A Grand Day Out (Academy Award® Nominee), The Wrong Trousers (Academy Award® Winner), A Close Shave (Academy Award® Winner) and their latest title, A Matter of Loaf and Death (2008 British Academy Film Award winner) — their first animation since 2005.

To celebrate the release, Gunaxin has a copy of each to give away to two lucky readers. Here is how you can enter to win: