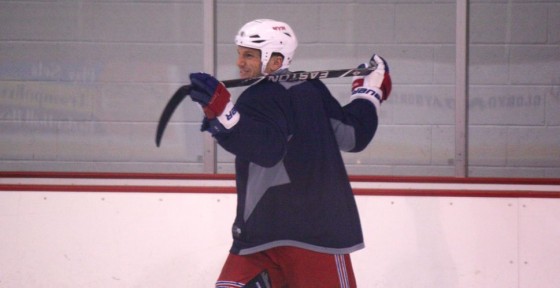 (Photo by Alena Schwarz of CapitalsOutsider.com)

I suppose it didn’t come as much of a surprise when John Tortorella decided to cut Sean Avery from the New York Rangers. The two never seemed to mesh (and 29 other teams didn’t want him, either). But what became apparent to me, a blogger, was that no NHL player more than Avery in the past few years has been so interesting to write and read about.

Avery is a first class jerk. He sucker punches people. He accuses them of biting him. He hits goalies in the head while they’re not even playing. He gets arrested. The list goes ON.

Who else, by comparison, routinely makes headlines? Sidney Crosby, and his concussions. Matt Cooke, who keeps hurting people and getting suspended. Alexander Semin, and the perception that he doesn’t care.

Articles such as those are relatively routine each season. Stars get hurt, goons get multiple suspensions, and Russians make us scratch our heads and wonder. We expect such things. Avery’s antics, including his love of fashion and his gay marriage endorsement, are lathered with unpredictability, and that is a media goldmine. I can’t think of any other player since the NBA’s Dennis Rodman who had the ability to entertain us (for better or worse) just as much off the playing field as on it. As a writer and a reader, I can say with certainty that an article on Avery draws more interest than any run-of-the-mill news story, analysis, or routine feature.

But unlike Rodman, Avery has never had the skillset to put him in the spotlight for his play alone, and he apparently isn’t good enough to play in the NHL anymore. Without him, we’re back to reading about concussions and listening to players speak in broken English. For bloggers and readers alike, the NHL needs more Sean Averys to keep things interesting.