Media > Movies > War for the Planet of the Apes: Review

War for the Planet of the Apes: Review 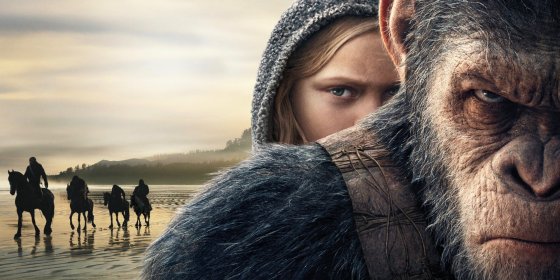 Director Matt Reeves and crew continue to astonish with the ostensible conclusion to a franchise that started as a respectable revitalization and proceeded to surpass all expectations as the best iconic prequel series of recent memory.

“Dawn of the Planet of the Apes” was a fantastic action movie, a fluid fusion of practical and digital effects that overwhelmed but never overloaded, as various factions of simian and human duked it out with all manner of armaments. Without a doubt most impressive was the expressive realism of the titular stars, made possible by the latest and greatest motion capture technology. 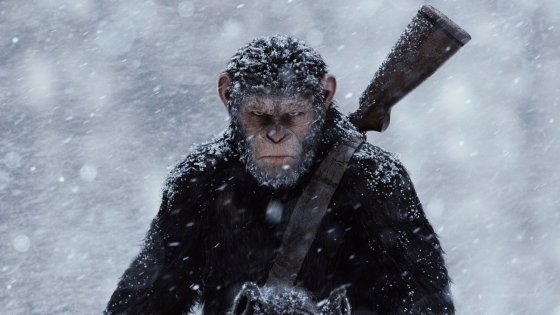 This film is no less impressive. At its center is physical actor extraordinaire Andy Serkis, who plays the ape leader Caesar, a formidable but peace-seeking chimpanzee whose rapidly evolving intellect has developed a vocabulary better than the average college graduate. He has built an army,—not to mount an epic offensive, but rather to protect his species, and more specifically, his family.

In “War For the Planet of the Apes”, which, in and of itself, is actually less of a full-on war movie than its predecessor (though bookended by two very well choreographed battle sequences), Caesar and his primates find themselves hunted by a ruthless commando (Woody Harrelson). 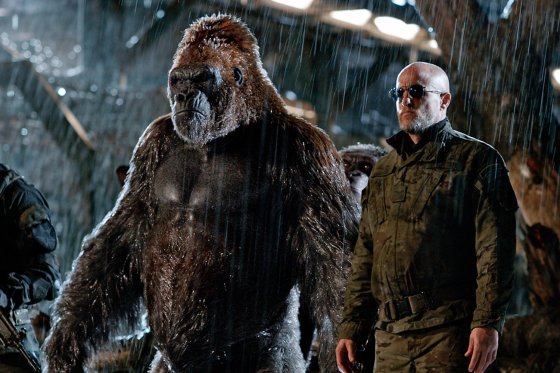 After a staggering loss at the hands of Harrelson’s crazy-eyed Colonel, Caesar ventures out, hellbent on revenge. Fearing his instincts are hewing too close to the vengeful Koba (Toby Kebbell), Caesar sets out on his own, leaving infant Cornelius to be cared for by the rest of the clan.

The undertaking in this new film is greater than ever: there is considerably more time spent among the apes, as the only true human protagonist is a mute little girl named Nova (Amiah Miller), a character people my age will recognize from the 1968 classic. Alternating between speech and sign language, we are immersed in ape culture for lengthy periods of time; our proper introduction to the evil homo-sapiens doesn’t occur until at least halfway through the film.

For those folks—especially parents—unfamiliar with this franchise, it’s  not like “The Jungle Book” in which the lexicon of the animal kingdom is translated into English; here we are to believe that these creatures are actually becoming sophisticated enough  to speak and use automatic weapons. Once your eyes have feasted on it for more than five minutes,  any doubt will wane. 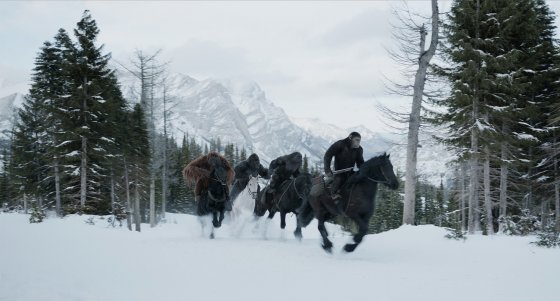 Amidst the incredible FX and big, beautiful set pieces, there is a brutal melancholy that permeates Caesar’s disintegrating kingdom, a sense of loss that most human-exclusive flicks fail to acheive. Where the trees end and the world of the Colonel begins, there is a fortress that serves as a concentration camp, seemingly right at the gates of hell. 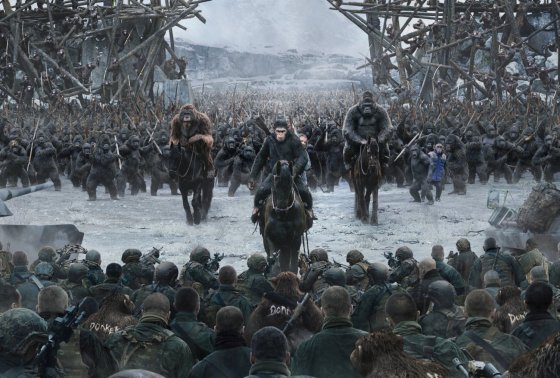 But Colonel’s wall is clearly a barrier from a larger threat: other humans. Harrelson makes  his slightly psychotic, unaccidently Brando-esque (though notably skinnier) rogue  an individual who’s proven capable of killing his own in order to protect his species, but with a suffocating air of regret, a single photograph speaking the proverbial thousand words about what he once had. 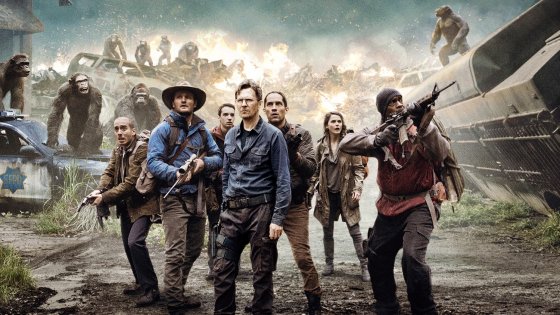 Having a multi-dimensional antagonist is key, and let’s face it, rare (at least to favorable effect). His army of drones, with the exception of one, are relatively flavorless. Yet they are there as an allegory for some horrific moments in history in which soldiers blindly followed a murderous dictator. This point is neither subtle nor heavy-handed; the plotting is handled with great care. 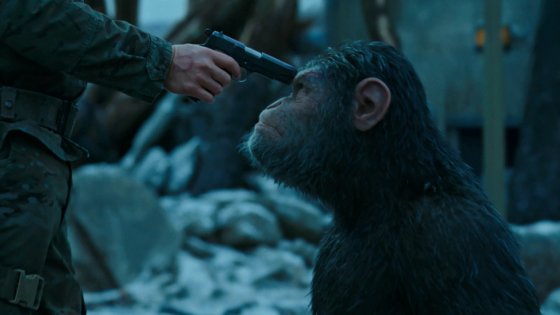 “War of the Planet of the Apes” is written by returning penman Mark Bomback and director Matt Reeves, enriched by Rick Jaffa and Amanda Silver’s character backstory contribution in 2014’s “Dawn”. At 142 minutes and only a little bit of lag, this flick will make you hold that 42-ounce soda you’re cursing yourself for consuming all the way until the credits roll. 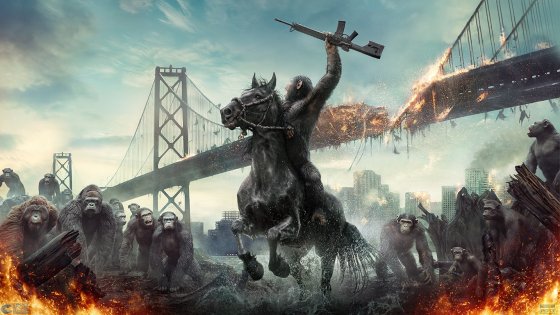 There is a deluge of finely-tuned action, with exceptional cinematography (returning DP Michael Seresin) and what are bound to be a couple of the year’s biggest practically manufactured explosions. But the film’s best attribute is its humanity. It is truly an emotional picture, even when it doesn’t feel like it’s trying. It is not without its laughs, to be sure: Steve Zahn plays a skittish chimp designated Bad Ape by his previous human captors who is hilarious at the right moments, though never relegated to the comic relief corner. Rather, this fragile, hyper-sensitive character adds depth to the film as one of its most impressive and realistic, expressive components, his weathered appearance alone eliciting sympathy, as one can only imagine what type of physical abuse he’s endured.

War for the Planet of the Apes

Director Matt Reeves and crew continue to astonish with the ostensible conclusion to a franchise that started as a respectable revitalization and proceeded to surpass all expectations as the best iconic prequel series of recent memory.