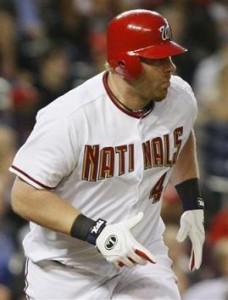 In case you don’t know all that much about baseball, then you’re probably not aware at how much the Washington Nationals suck. The former Montreal Expos franchise finished with the worst record in baseball last season. They haven’t made the playoffs since 1981. The team hasn’t topped 83 wins since 1996. Basically, they haven’t been a contender since forever. Not a lot to look forward to down in the nation’s capital.

But to add insult to injury, they couldn’t even spell their own franchise name correctly. In Friday night’s loss to the Marlins, Nationals 3B Ryan Zimmerman and OF in name only Adam Dunn both wore jerseys that said “NATINALS”. No “O” needed. Given the nature of baseball uniforms, you might have thought the letter was hidden under the overlap. No such luck. It was omitted. I haven’t been this impressed with a jersey fail since the Minnesota Timberwolves did the same thing. Steve Strasburg can’t be drafted soon enough for this franchise.