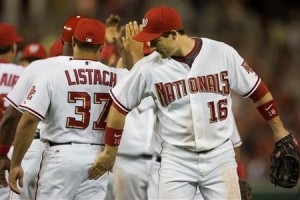 It’s no secret that the Washington Nationals are the worst team in Major League Baseball and have become a national joke. As a resident of the area, I have paid close attention to the struggles of the Nats this season, and have been waiting for the right time to put together this piece. With the arrival of the All-Star break, and today’s firing of Manager Manny Acta, I felt the time was right. The Washington Nationals have endured one of the most ridiculous seasons that anyone can remember, and have been besieged by failure in all aspects of the franchise, not just on the field. In an effort to preserve this tremendous failure of a season, we have attempted to document it below. There was certainly no shortage of content when it comes to Nationals’ Failure.

February 18th : The “Player to be named later”

April 10th : Obama will not toss out first pitch on opening day

May 22nd : About those MASN ‘Defining Moments’

June 10th: …and less than 100 fans watched it in the Stadium

That seems exhaustive enough, but sadly I am sure I am missing plenty. If you have any additional links, feel free to add them in the comments section. Go Nats!