Sports > Football > Nobody Loves Mediocre Receivers Quite Like the Redskins 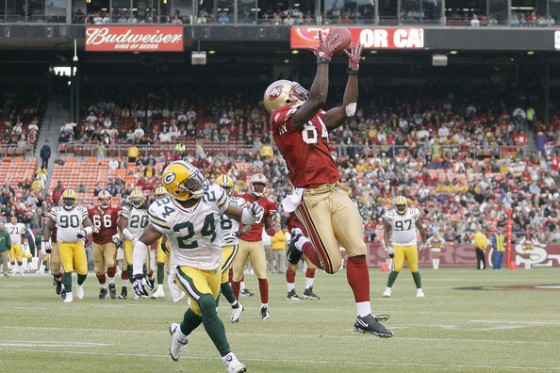 The NFL’s annual free agency spendgasm began blowing its load yesterday at 4pm. As expected, the always ready to perform Daniel Snyder was standing at attention eagerly waiting to spray his raging wad of cash into the bank accounts of some of the league’s most painfully average wide receivers.

Following in the legendary footsteps of Brandon Lloyd, Antwaan Randle El, Keenan McCardell, Devin Thomas, Malcolm Kelly, Joey Galloway and Jabar Gaffney, the Redskins committed in the neighborhood of $55 million to sign Pierre Garcon and Josh Morgan, and are rumored to be circling on Eddie Royal. The latter two combined to catch 34 passes for 375 yards and 2 touchdowns in 2011. Garcon was better (70, 947, 6), but most of his numbers came in three games. Hey, at least all three are 26 or younger.

What this means for the aging Santana Moss and the oft-injured Chris Cooley remains to be seen, but it’s apparent Mike Shanahan wanted to, uh, upgrade(?) the position now that they’ve traded this year’s first- and second-round draft picks and two future first-rounders for the right to land Heisman Trophy-winning quarterback Robert Griffin III.

Meanwhile, the Saints re-upped with the overrated Marques Colston and Tampa Bay drained the coffers for the equally overrated Vincent Jackson.

The ‘Skins better hope one of the three new arrivals plays above their heads, or Leonard Hankerson and Niles Paul turn into keepers, because it’s not as if they can use a first-round pick to find a legit number one receiver for Griffin to have fun with. Stud wideouts really do make life easier on young quarterbacks. Just ask Matt Stafford, Cam Newton and Andy Dalton.