Media > Comics > What Is the Most Wasted Superpower in Comic History?

What Is the Most Wasted Superpower in Comic History?

The guy up there with the skeleton face is Tony Masters, aka The Taskmaster, a Marvel character you’re probably not familiar with since he hasn’t been in a movie yet. He did however appear in an episode of Ultimate Spider-Man, in which he looks exactly a Spanish child molester, which kind of ruins how awesome he looks in the image above. We’re not kidding — look at the guy below and tell us you’d trust him with children. 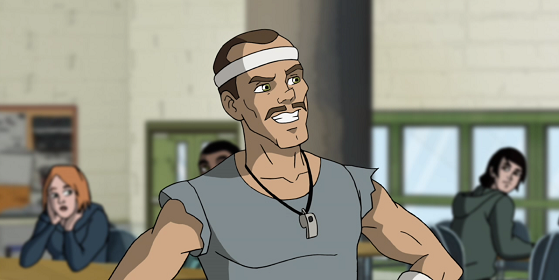 Shorts are optional today, for all lessons.

That aside, Tony Masters has perhaps one of the greatest superpowers in comic history, the completely made up but still completely awesome ability, “photographic reflexes“. Basically, anything the Taskmaster sees someone do, he can do. Whether it’s a world-class Olympic gymnast’s best routine, or the Punisher shooting Wolverine’s nuts off.

We’ve been waiting a long time to use this image.

If this sounds like the kind of power you could massively abuse in a world filled with super powerful, highly trained martial artists you’d be right, and that’s exactly what the Taskmaster does, becoming one of the universe’s finest combatants. The thing is, Tony Masters is a mercenary, as in he works solely for money.

So just picture that you’re in Tony’s shoes, and you suddenly find that you have the ability to mimic any action perfectly first time, every time. What would you choose to do to make money?

1. Master every sport known to man in an afternoon and become a millionaire without ever having to once risk being punched to death by a superhero or …

2. Painstakingly learn the fighting styles of every hero in the Marvel canon, become a mercenary, and earn your money fighting infinite Hitlers.

Don’t worry guys, I’ve got this.

If you chose the first option, congratulations, you’re officially smarter than one of Marvel universe’s deadliest warriors. Sure there’s always the option that Taskington just loves fighting, which would make sense if it wasn’t for the fact he often states the exact opposite of that, all the time!

Also he has a really thick Brooklyn accent. Which makes him more annoying.

It’s almost like he doesn’t realize that there are other ways to make money besides risking your life stabbing people in the face. On the other hand, if we had the ability to mimic any action, the first thing we’d do is watch every Bruce Lee movie ever made and stand in a bar waving our cock around. Maybe the Taskmaster really is in it for the thrills and he’s just a really good liar. People with skulls for a face aren’t exactly known for being trustworthy.