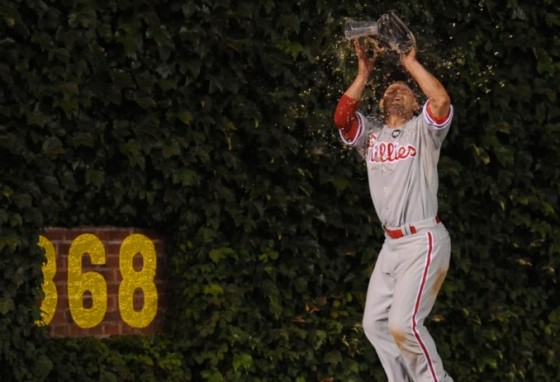 Earlier this week a fan at Wrigley Field decided he either didn’t like the Ice House that he was drinking or wanted to give Philadelphia Phillies center fielder Shane Victorino a free beer when he was about to catch a fly ball. Either way the guy looked like a moron and Victorino is so bent out of shape that he has said he wants to press charges. So worse than the fact that fans are throwing stuff on the field, and worse than the fact that they blamed the wrong guy, is the sheer fact that these idiots are wasting beer! Hey Cub fans, next time you are done with your beer turn to your neighbor and ask if he would like to indulge in the rest of the ice cold brew. There is never a good excuse to waste a nice adult beverage.

Here is some additional coverage on this incident:

… because you wouldn’t want to share video without the express written consent of Major League Baseball.

Frozen and Fearless: A Tribute to Extreme Skiing