Unless you’ve been living under a rock for the last several months, you’re probably aware that there’s this highly anticipated movie coming on March 6th called Watchmen. However, unless you’re a hardcore movie fan or comic fan, you might know nothing about the Watchmen. It doesn’t exactly have the widespread notoriety of Batman or Superman. So here’s a Cliff’s Notes primer on the series and the movie. 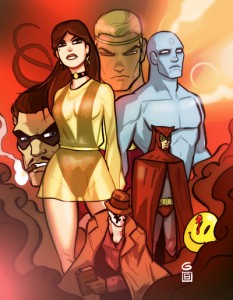 To begin, you can watch a trailer here to familiarize yourself with the material. From the mind of Zach Snyder, the man who directed 300, comes this adaptation of a twelve-issue comic book created by Alan Moore. Moore was also the creative force behind V for Vendetta and From Hell, both of which were later adapted into films.

Watchmen takes place in an alternate reality which closely mirrors the contemporary world of the 1980s. For example, the United States is edging closer to a nuclear war with the Soviet Union, much like the real life Cold War. The one major difference is the presence of superheroes. Costumed vigilantes, think Batman or Spiderman but with different attire, roam the streets and fight crime. Their impact is felt, but over time they grow unpopular among the public. Eventually legislation is passed in 1977 to outlaw them altogether. While many of the heroes retired, two of them, Doctor Manhattan and the Comedian, operate as government-sanctioned agents. A third hero, Rorschach, continues to operate outside the law.

The plot kicks off with the murder of Edward Blake, the Comedian. Police are unable to turn up any leads and Rorschach decides to probe further. What he finds is a bit of a conspiracy theory, believing he has discovered a plot to eliminate the costumed adventurers. In response, he sets about warning three of his retired comrades: the Nite Owl, the Silk Spectre, and Ozymandias, plus Doctor Manhattan. Shortly thereafter many of them are set-up, which pulls them all out of retirement and eventually uncovers something much greater. I won’t spoil anything more, you’ll have to watch the movie or read the book to find out more.

The six principle characters are as follows: 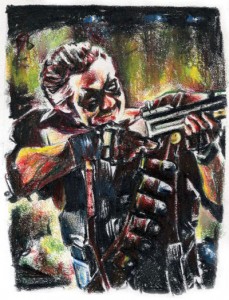 Played in the Movie by: Jeffrey Dean Morgan

A long time vigilante, he had been active for over forty years, either on his own or through the aide of government-sponsored activities. Basically, he is a cigar-chomping, gun-toting vigilante-turned-paramilitary agent. He is known as a nihilist with little regard for morality or human life. He sees the world as a sadistic joke only he understands. You often see the Comedian wear a “smiley-face” button, hence its presence in movie advertisements. At the beginning of the series, the button is smeared with a single drop of blood, which, if the button is viewed as a clock face, is at the position of the minute hand of the Doomsday Clock at the time of the series, five minutes to midnight. 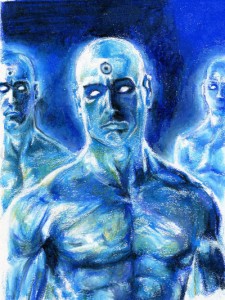 Played in the Movie by: Billy Crudup

The only character in Watchmen with actual superhuman powers after a nuclear physics experiment goes wrong. Initially he is contracted by the United States government and marketed as a superhero. However, he grows increasingly disinterested in human affairs and is unable to connect with others, especially his love interest, the Silk Spectre. Eventually he rejects the validity of any notion of morality. Something of a God-figure due to his near omniscient knowledge and almost omnipotent powers, he is also as flawed and human as the rest of the Watchmen. 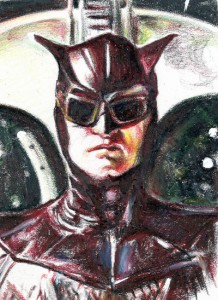 Played in the Movie by: Patrick Wilson

Skills and Equipment: Technical wizardry along the lines of Batman.

Dan Dreiberg is actually the second Nite Owl. The original Nite Owl, Hollis Mason, was his idol and when he retired, Dreiberg wrote to Mason, asking if he could carry on his name. Mason accepted and the the two men became friends, meeting every Saturday. Dreiberg is also friends with Rorschach, and partners with him from time to time. Unlike many of the Watchmen, he is friendly, honest, and affable. He was left a large inheritance, which he used to design and build his crime-fighting gear. As you might guess, all of his gadgets and costumes are based on an owl theme. 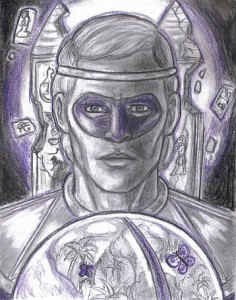 Played in the Movie by: Matthew Goode

Skills and Equipment: One of the smartest men on the planet, intelligence leads to the exploitation of advanced technology and genetics, world-class athlete.

Adrian Veidt was formerly the superhero Ozymandias, who retired to devote his attention to the running of his own enterprises. He draws inspiration from his hero Alexander the Great. He is often accompanied by his genetically-engineered pet Bubastis. A highly ambitious man, he is also a ruthless master strategist, swiftly eliminating anybody who dares to get in the way of his plans. As a character, he is the polar opposite to Rorschach. He is successful, good-looking, popular, and at the heart of society, not on the fringe. 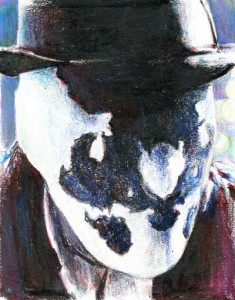 Played in the Movie by: Jackie Earle Haley

Skills and Equipment: Blatantly ruthless, overwhelmingly strong, good at the use of improvised weapons, skilled at picking locks, a good detective, carries a grappling hook.

Rorschach is easily identified by the inkblot mask he wears to conceal his face. It is also where he gets his name. The mask contains two viscous liquids, one black and one white, which are held between two layers of latex. The liquids continually shift in response to heat and pressure, forming symmetrical patterns like those of a Rorschach inkblot test. He is the one man who continued to battle crime long after costumed vigilantes became both detested and illegal. He does this because he has a moral absolutism, where good and evil are clearly defined and evil must be violently punished. These beliefs and their pursuit have alienated him from the rest of society. Politically, he is an extremely right-wing character. He is an anti-communist, anti-liberal, reactionary, and a strong nationalist. I guess he wouldn’t have voted for Obama. 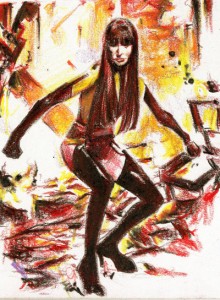 Played in the Movie by: Malin Akerman

Like the Nite Owl, Laurie Juspeczyk is not the original Silk Spectre. She is the daughter of Sally Jupiter, the first Silk Spectre (played by Carla Gugino in the movie). Sally fought crime for years and wanted her daughter to follow in her footsteps. Not enthusiastic to the idea, she followed anyway, which would lead to her becoming romantically involved with Dr. Manhattan. That is something her mother did not approve of as she likened it to sleeping withan H-bomb. Because of her relationship with the Doctor, she is kept on retainer by the government. Never exactly happy being a vigilante, nor happy with the government taking advantage of her relationship, she was more than pleased to quit being a superhero when they were banned. Eventually her relationship with Dr. Manhattan becomes strained as he grows distant with her.

So there’s your brief rundown of the characters and the basic storyline. If you are interested in finding our more, you can wait for the film or check out the books right now.