Media > Weapon Versus Weapon: The Showdown

Weapon Versus Weapon: The Showdown 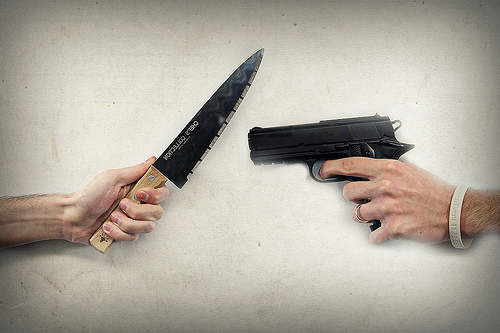 Often times a fair fight is decided ultimately by a weapon. Like, “never bring a knife to a gun fight”, it’s also unwise to go fists against, maybe, a chainsaw. Now, if two weapons are employed, one per each side of the battle, well then you’ve got something. Going weapon versus weapon is something entirely different and more frequently than not, the fighting utensil you’d least expect seems to be the winner. I mean which do you honestly expect to stand the victor, a Louisville Slugger or a mini-gun? And that’s the point: sometimes you just never know. So here we have the finest in Weapon Versus Weapon.

Kyle Rayner, the most recent of the many men, woman, and aliens to control the power ring and the power he wields is green. In the other corner, Sinestro. He, too, does battle with a power ring, though his is yellow, and everyone knows you take the green from the good and mix it with the yellow from the bad, and well, you get a big old mess. The two of them can create anything within their collective imaginations with which to attempt to destroy one another. These two, as well as just about every other Green Lantern ever, have gone to war as often as you can imagine, and just a frequently, there really isn’t a clear winner. Well, aside from the readers who get to see it all happen in DC Comics.

For all intents and purposes, MegaMan is a weapon. Originally named ‘Rock’, MegaMan was a robot used for industrial purposes much like his original nemeses Bomb Man, Guts Man, Cut Man, Elec Man, Ice Man and Fire Man. However, unlike that lot, Rock was not reprogrammed by Dr. Wily. What did happen was this: he was rebuilt by Dr. Light, the good guy, and sent out to thwart the evil doings of Dr. Wily with the ability to absorb all those baddies powers. And the rest, as they say, is history.

There is little to deny about the simple fact that a Terminator is completely and utterly a weapon. In the not too distant future, the SkyNet company’s robots become self aware and obliterate as much of the Earth’s population as they could, unfortunately leaving a few to form a resistance who will stop at nothing to try to destroy the bots. The Terminators come in a variety of styles from a fully robotic and metal endo-skeleton to liquid metal alloys, but the simple fact still remains: they are weapons with but one purpose: destruction. Especially anyone with the last name Connor.

If you have yet to see Tokyo Gore Police, it is really something you need to experience on your own and a movie that I can’t recommend enough. From Wikipedia: “The film is set in a near future chaotic Japan. A mad scientist known as “Key Man” has created a virus that mutates humans into monstrous creatures called “Engineers” that sprout bizarre weapons from any injury. The Tokyo Police Force has been privatized to deal with this new threat of engineers, so a special squad of officers called “Engineer Hunters” are created to deal with them. However, unlike the average police force, the Engineer Hunters are a private quasi-military force that utilizes violence, sadism, and streetside executions to maintain law and order. Helping the with police force is Ruka, an anti-social, self-harming loner, who is very skilled in dispatching the engineers.” The following scene is the climactic battle. There is an awful lot of fake blood, so be warned.

The game is Donkey Kong. You control Jumpman, a carpenter whose only job is to rescue his girlfriend, Lady, while avoiding any and every conceivable obstacle from fireballs to bouncing weights. But, alas, perched atop the screen holding the damsel captive is Donkey Kong himself: a gigantic, King Kong-esque gorilla who commands the very items being lobbed at our hero. One of the few repasts Jumpman receives is the hammer; the temporary weapon used to mash barrels, another of Kong’s myriad weapons. Use it wisely.

Jackie Chan and Anything Vs. Anyone Else

Jackie Chan is a martial arts legend. His acrobatics are mystical and downright unbelievable. Seeing Chan with his hand and foot control is something to behold, but seeing him with any object within reach go against anyone else with a sword, a sai, a friggin iron pipe, is something else entirely. Give Jackie a stool, a broom, even a towel, and it really doesn’t matter if you have an automatic rifle, you, sir, are getting your ass handed to you.

It’s amazing that something so small in a scene that’s would otherwise seem at once throw-away, could something so direction-changing occur. While being held captive in a German tank, Henry Jones and Marcus Brody do their best to help Indy (riding horseback, and eventually tread-back) outside of the machine. Neither has a ‘weapon’ to speak of, and both seem comically out of their respective elements when suddenly, and without warning, Jones spurts the German Officer (with a gun, mind you) in the face with his ink-well pen. Classic.

It’s no secret that a Jedi’s weapon, the Lightaber, can pretty much cut through anything like a hot Ginsu through a cinder block. But what some might not know is that it can also deflect stuff, such as blaster bolts. Seen first in its primary defensive usage on the Sail Barge in Return of the Jedi when it bounced a bunch of laser blasts back at their owners, it was even more at the forefront in Episode II: Attack of the Clones. Watch as young Anakin whips up on some droid ass and Mace beheads good old Jango Fett.

When two seemingly unstoppable horror movie icons were pitted against one another in the ultimate battle film, Freddy Vs. Jason, you just knew the proverbial shit was going to hit the fan. And it really, really did. At first, Freddy confuses the poor, doltish lug, Jason into believing that his long dead mother was commanding him to slaughter the general populous of the town. When Freddy realizes Jason was doing all the killing and getting all the credit, the gloves came off (well, all but one) and the big battle began.

Perhaps the must well known weapon versus weapon scene was this one from Raiders of the Lost Ark. Indiana Jones has been run ragged trying to fend off the enemy all the while searching in vain for Marian. Suddenly finding himself trapped in an alley, Indy is confronted by a scimitar-wielding baddie and, well, he’s just not in the mood. Famously, as heard in the extras in the DVD commentary, Harrison Ford admitted to being really sick during the scene’s shoot and just asked Lucas if he could just phone it in. What came of it is Hollywood gold.