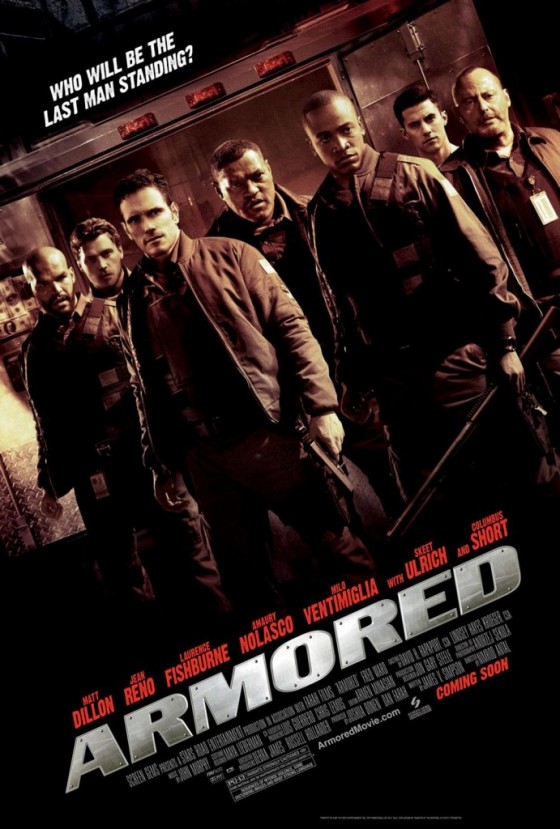 Left to right: all that is man

This week sees “Armored” hitting theaters.  “Armored” was directed by the unfortunately named but highly talented Nimrod Amatal, who has a gift for taking retarded ideas like “whiny yuppie couple trapped in a hotel with snuff killers” and turning them into movies worth watching, like “Vacancy”.  “Armored” has been getting awesome buzz and apparently will break a foot off in your ass with how awesome it is.

Also opening this weekend is “Brothers”, where the Prince of Persia and Spider-Man fight over Queen Amidala.  OK, OK, Tobey Maguire and Jake Gyllenhaal play brothers, and while Jake and Natalie think Tobey’s dead, he slips her the wood.  Tobey, already kind of off-kilter from being stuck in whatever contrived plot device made everybody think he was dead when he was just being held prisoner, is understandably a bit pissed that his brother boned his wife.  Oscar-bait hijinks ensue.

Finally, we’ve got “Everybody’s Fine”, which Miramax is selling like it’s “Meet the Fockers’ Cousins” but is actually apparently a sensitive, touching drama featuring some of DeNiro’s best work in years.  Since he obviously wasn’t awake for his last three movies, just seeing him conscious will be an improvement.