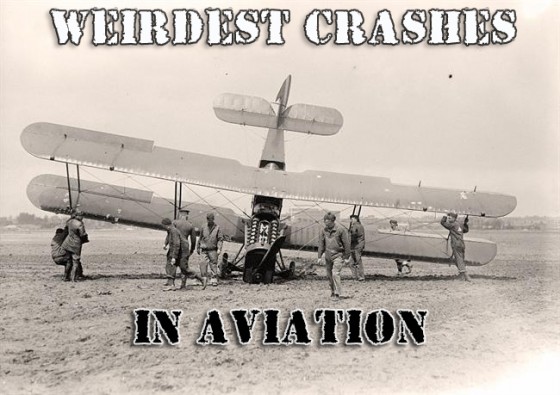 When the President of Poland along with most of his government crashed in Russia near the spot where thousands of Polish Officers were massacred by The Soviet Union in World War 2, people thought that was rather bizarre. Bizarre it may be and tragic as well, but these crashes have that one beat by a mile.

The biggest stretch would have to be the man killed by a flying lawnmower. That’s right, during a halftime show at Shea Stadium in 1979 in a game between the New York Jets and the New England Patriots, there was an exhibition of radio controlled flying devices. One of these being a flying lawnmower. I had no idea that air needed mowing and when this contraption took a death dive it slammed into two people killing one of them.

Then there was the crash of the Aeroflot Airbus A310 over south-central Russia. Seems the pilot was letting his children take turns at the controls. When his son wrenched on the wheel he turned off the autopilot sending the plane into a death spiral killing everyone on board. His daughter had gone first proving, in the end, that she was the better pilot.

And let’s not forget poor Randy Rhoades, guitarist for Ozzy Osbourne. When the plane he was in struck the tour bus that Ozzy was in and sent the plane into crash and die mode. Interesting seeing as how the pilot had cocaine in his system and was not licensed for flying as his license had expired.

Andrew Thornton was a convicted drug smuggler and when he was flying his plane over Georgia he dumped his load. Investigators discovered a 175 pound black bear with forty open containers that had traces of cocaine. Forty Empty Containers! Man, what a rush!

On March 5th 1966 the pilot of British Overseas Airways wanted to give his passengers a better look at Mount Fuji. Apparently, being in close proximity of a mountain can cause turbulence even on a clear day. The passengers got more of a view than they bargained for when the plane crashed into the mountain.

The One Where No One Died, But Still Hilarious

And they don’t all have to be tragic. A small Cessna 182 Crashed in Washington State and the pilot was able to use a bunch of port a johns to cushion the fall. The pilot walked away without a scratch.