The Weirdest Deep-Fried Goodies Making The Fair Circuit in 2012 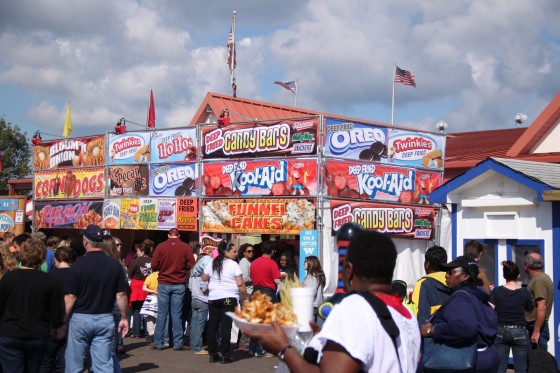 Hey, I enjoy a good fried hunk of food just as much as the next, red-blood-clotted American, but I have to say, times have really gotten bizarre since the last time I was at a State Fair. Back in the 80’s things were a hell of a lot simpler: fried cocaine, fried Disco Albums, Deep-Fried clams… and like that, but over the past ten years or so, Fair cooks began really pushing the hot-oil envelope. It started with things like Deep-Fried Twinkies and cakes, and then moved on to fried candies and cookies. Oh, but that mess just wasn’t going to cut it. Oh no. People really had to scour the pantry and fridge for the next best thing! So Deep-Fried Coke hit the scene, along with a few variations on sweets already in the ‘mix’ (see what I did there?). But now that it’s deep into the new millennium, it’s time to really go crazy.

As with all fried liquids, you can't just chuck a cup of it into a roiling pot of hot oil. Well, I guess if you want third-degree burns on your face, you could, but unless you're a Carny, no one wants that. So this particular recipe calls for blending the Kool Aid mix into something akin to a doughnut ball, and then chucking that into boiling oil. But probably with more finesse than that. Now I don't know if the dude who invented this hot mess uses other flavors besides cherry, but it doesn't seem to matter since they're selling like hot... batter at fairs all over the place. Americans. We'll eat anything unrecognizable and fried. 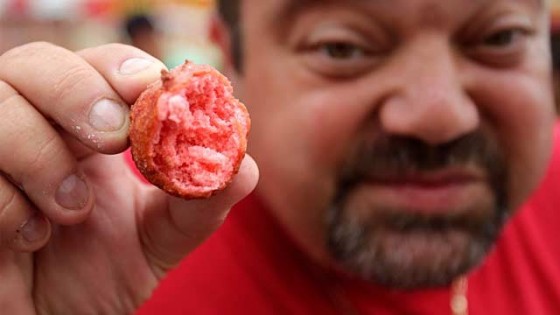 I'm not much of a jelly bean person. I like some of the 'Jelly Belly' types, but that's just because they taste like something other than sugared glue. So how can the new generation of Fair Chefs improve on the fact that, a) Jelly Beans are typically a once-a-year confection, and b) they taste like sweetened Vaseline? Well, apparently they can deep-fry them. And someone did! Rolled up in little dough balls, this super genius snuggles a bean or two and drops the whole disgusting glob into a spa of cooking oil! And Blammo! Deep-Fried Jelly Beans! Somehow I doubt that a doughnut smuggling a hidden jelly bean is going to mask the flavor of said bean, other than to make it... moist, but, whatever. Happy Easter-Fair! 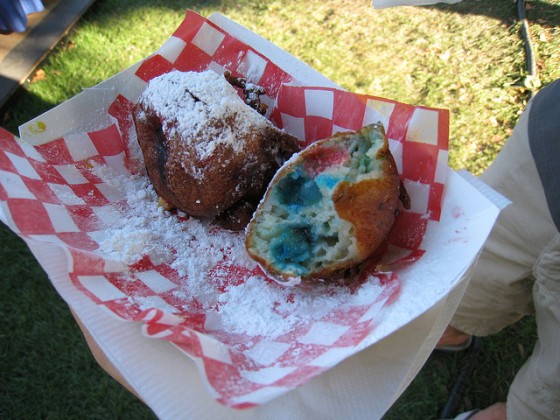 If you look closely at most Fair goers, you'll notice one glaringly similar trait: They're all pretty Triple-X-L, if you gather my vaguely veiled meaning. But that isn't to say that fact is a bad thing, it's just an unhealthy thing. And this could be because most of the greatest Fairs take place in and around ultra-urban surroundings where the town in question's population doesn't refer to the people, but the number of teeth at that time. So why do people tend to get balloonish at the Fair? Well, it could be because the Fair offers such artery-damming goodies as Deep-Fried Butter. What? Oh like you didn't know. This isn't new to 2012, but it is fairly new, and Fair-goers are just smacking their jowls with drooly excitement. 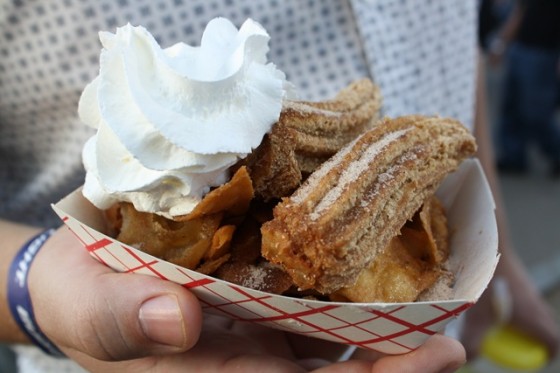 Wait. Hold on. Does that say Deep-Fried...BEER? Oooo...kay. Hold it together, man. It might just be some weird attempt to make you enjoy a beer on another level besides 'in a glass'. It's not? It's a THING and you can eat it? Yep. But I'm not entirely convinced this is the best idea of all time. Basically it's a pretzel-like deep-fried shell filled with the beer, and then served... hot. Look, this could taste like a meal served at the Pearly Gates of Heaven served by St. Peter himself, but I'm not too keen on hot beer, whether it's served in a fried pretzel or a diamond chalice. I think I'll skip this one, thanks. 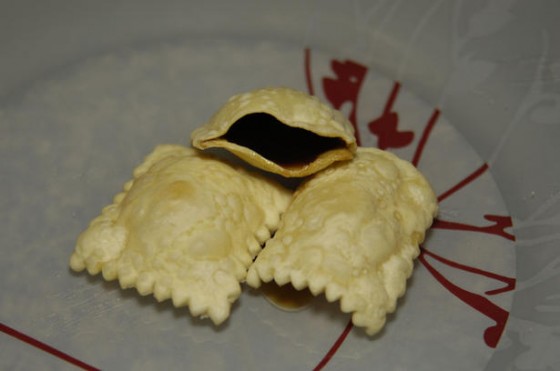 Well kids, we've reached the very pinnacle of New-Era Deep-Fried Fair Food: The Fried Bubble Gum. And once again, I am caught at a loss because I just don't see how a hunk of gum coated in steamy oil is going to make anything other than a hot mess. But, as it turns out, a few corners were cut to actually create this mess-terpiece (see what I did there, too?) so it didn't just end up a molten puddle of gross. The creator took a marshmallow, coated it in gum essence (whatever the hell that is- like the soul of gum I suppose), dunked it in a batter infused with gum flavor, and then deep fried it. So, basically, it's a gummy dough-ball with a hot marshmallow gooping around inside. I think I can actually hear my heart punching itself right now. 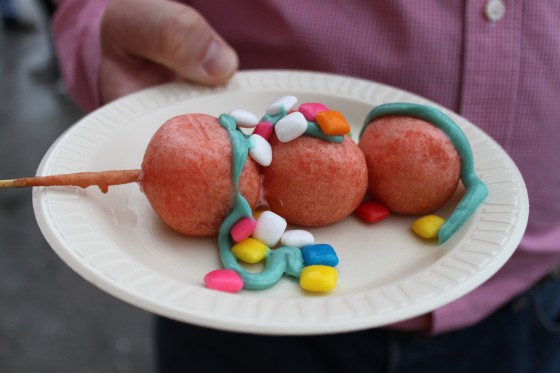