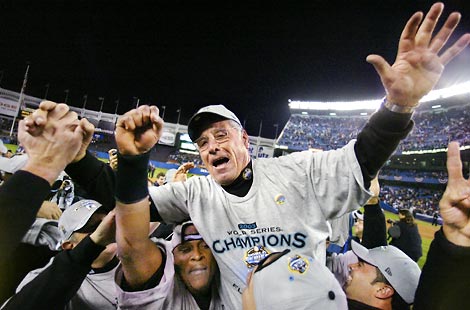 As the grind of the Major League Baseball season continues, Florida Marlins manager Edwin Rodriguez decided to flee the scene after less than a year with the team. So, the Marlins were in search for an interim man to hold the position. They decided to go with someone who already had success with the team in the past, 80-year old Jack McKeon.

For those who have forgotten, McKeon was at the head of the 2003 Marlins team that shocked the New York Yankees in the World Series and became the oldest manager to claim a World Series ring. After taking the position as the interim manager, McKeon became the second oldest manager in Major League history only trailing the legendary Connie Mack by seven years.

McKeon was pretty quick in making his mark on this Marlins team that won only one game in it’s last nineteen tries by benching star Hanley Ramirez after he appeared late to a team meeting. McKeon’s no-nonsense style is something that a team like the Marlins needs after appearing to have lost their way this season under Rodriguez. The Marlins have a fresh crop of young players and McKeon might be able to get the most out of them by using his experience through the past four decades.

To note, McKeon isn’t going to be the next choice for the Florida Marlins manager next season when the team is set to move into a brand new ballpark and will be looking for a new manager to help move the team in a new direction. However, it’s nice for McKeon to be back in a league that he’s managed in since the 1970’s.

Since McKeon started managing the Kansas City Royals back in 1973, there have been nearly 157 managers that encompassed his career in the Major Leagues. The immortal names include Maury Wills, Mel Queen, and Ted Turner…Yes I mean that Ted Turner. It is a testament to how the league changed over the years but also in McKeon’s corner, it’s also how baseball has stayed the same. Think how many professions there are in our society that someone can do while they’re thirty and then pick up again thirty years later, not that many but Major League Baseball manager is one of them.

For McKeon, hopefully he’ll be able to treasure the rest of this season from the dugout where he has seen so much during his managerial career and for us to celebrate, the fact that eighty-year old managers don’t come along every blue moon.