Sports > Baseball > What A Dozen Baseball Teams Used to Be.

What A Dozen Baseball Teams Used to Be. 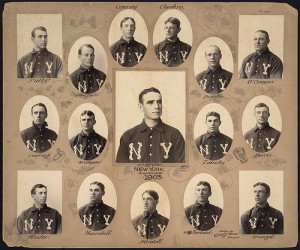 It’s no surprise that professional sports teams have been shuffled around from city to city like proverbial chess pieces. It should also be no big shocker that many of today’s MLB teams didn’t used to have the same names. The history of these twelve teams is as rich as it is lengthy; often going from ownership to new leagues and on to completely different states like a pandemic. So sit back with your ball glove and check out what one of your favorite teams once was. Oh, and I’d like to give a shout-out to sportslogos.net from whom I borrowed nearly all of the old and new logos (click on them to see the full image).

From Wikipedia: ‘The team came to be known as the New York Highlanders for two reasons: it was a reference to the team’s elevated location, and also to the noted British military unit The Gordon Highlanders, which coincided with the team’s president, Joseph Gordon. As was common with all members of the American League, the team was also referred to as the New York Americans. The club was also being called the New York Yankees (or “Yanks”) in newspapers as early as 1904, because it was easier to type, and fit in headlines.’

From Wikipedia: ‘Unlike other clubs that had relocated in the 1950s, retaining their nickname and a sense of continuity with their past (such as the Brooklyn-Los Angeles Dodgers, New York-San Francisco Giants, Boston-Milwaukee Braves, and Philadelphia-Kansas City Athletics), the St. Louis Browns were renamed the Baltimore Orioles upon their transfer, implicitly distancing themselves at least somewhat from their history.‘

From Wikipedia: ‘In 1900, the Western League changed its name to the American League. It was still officially a minor league, subject to the governing National Agreement and an underling of the National League. The NL actually gave permission to the AL to put a team in Chicago, provided he not use the city name in the team’s branding. Comiskey moved his St. Paul (ne Sioux City) club to the Near South Side and renamed it the White Stockings, grabbing a nickname that had once been used by the Chicago Cubs.‘

From Wikipedia: ‘In 1895, owner George Vanderbeck decided to build Bennett Park at the corner of Michigan and Trumbull Avenues, which would remain their base of operations for the next 104 seasons. The first game at the corner was an exhibition on April 13, 1896. The team, now occasionally called the “Tigers,” beat a local semi-pro team, known as the Athletics, by a score of 30-3. They played their first Western League game at Bennett Park on April 28, 1896, defeating the Columbus Senators 17-2.

From Wikipedia: ‘In 1955 Calvin Griffith took over the team presidency. He sold Griffith Stadium to the city of Washington and leased it back, leading to speculation that the team was planning to move, as the Braves, Browns and Athletics had all done in the early 1950s. After an early flirtation with San Francisco, by 1957 Griffith was courting Minneapolis-St. Paul, a prolonged process that resulted in his rejecting the Twin Cities’ first offer[2] before agreeing to relocate. The American League opposed the move at first, but in 1960 a deal was reached: The Senators would move and would be replaced with an expansion Senators team for 1961. Thus, the old Washington Senators became the Minnesota Twins.’

From Wikipedia: ‘Though for a time as a Kansas City team, the “A”s wore “Kansas City” on their road jerseys and an interlocking “KC” on the cap, upon moving to Oakland the “A” cap emblem was restored, although in 1970 an “apostrophe-s” was added to the cap and uniform emblem to reflect the fact that then-team owner Charles O. Finley was in the process of officially changing the team’s name to the “A’s”.’

From Wikipedia: ‘Fan enmity came to a head in the team’s last game in Washington, on September 30. Thousands of fans simply walked in without paying because the security guards left early in the game, swelling the paid attendance of 14,460 to around 25,000. With the Senators leading 7–5 and two outs in the top of the ninth inning, several hundred youths stormed the field, raiding it for souvenirs. With the grass ripped up and first base pilfered, umpire crew chief Jim Honochick forfeited the game to the New York Yankees 9–0…During the off-season, additions were made to Turnpike Stadium to increase its seating capacity, and it was officially renamed Arlington Stadium. Bob Short also announced that the franchise would be called the Texas Rangers.’

From Wikipedia: ‘In 1907, the Beaneaters (temporarily) eliminated the last bit of red from their stockings because their manager thought the red dye could cause wounds to become infected. The American League club’s owner, Charles Taylor, wasted little time in changing his team’s name to the Red Sox, in place of the generic “Americans”. Media-driven nickname changes to the Doves in 1907 and the Rustlers in 1911 did nothing to change the National League club’s luck. The team became the Braves for the first time in 1912.’

From Wikipedia: ‘In all, the Anson-led Chicago Base Ball Club won six National League pennants between 1876 and 1886. As a result, Chicago’s club nickname transitioned, and by 1890 they had become known as the Chicago Colts, or sometimes “Anson’s Colts,” referring to Cap’s influence within the club. Anson was the first player in history to collect 3,000 hits, and when he left the team in 1898, the loss of his leadership resulted in the team becoming known as the Chicago Orphans (or Remnants) and a few forgettable seasons. After the 1900 season, the American Base-Ball League formed as a rival professional league, and incidentally the club’s old White Stockings nickname would be adopted by a new A.L. neighbor to the south… In 1902, Spalding, who by this time had revamped the roster to boast what would soon be one of the best teams of the early century, sold the club to John Hart, and the franchise ultimately became known as the Chicago Cubs.

From Wikipedia: ‘Giants owner Horace Stoneham was having similar difficulty finding a replacement for his team’s antiquated home stadium, the Polo Grounds. Stoneham was considering moving the Giants to Minneapolis, but was persuaded instead to move them to San Francisco, ensuring that the Dodgers would have a National League rival closer than St. Louis. So the two arch-rival teams, the Dodgers (ne Superbas) and Giants, moved out to the West Coast together after the 1957 season.

From Wikipedia: ‘The American Association went bankrupt in 1892, and the St. Louis Browns moved to the National League, leaving much of their success behind for the next three decades. The club changed its name to the “Perfectos” in 1899, before adopting the “Cardinals” name in 1900.‘