Humor > What God Looks Like – From the Mind of a Child

What God Looks Like – From the Mind of a Child

We all know that children have wild imaginations. Before we knew where babies came from, we had to think creatively for ourselves, and I’m sure each of us drew our own conclusion that most of us no longer remember, or choose to forget. I would like to share with you a thought I had when I was very young.

When I was a kid, I always heard about God. But no one had a photo of God, and He certainly didn’t have a voice (except in The Ten Commandments). I’m sure all kids at some point wonder what God looks like, and most of them eventually settle on believing Him to look like a very old man with a long, white beard and a deep voice.

But not me. Once, I went to the movies, and I came out being convinced that God Almighty looks like this: 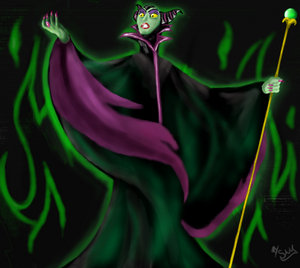 This is Maleficent, from Walt Disney’s 1959 hit Sleeping Beauty.

Okay, before you call me retarded, hear me out. Yes, Maleficent is a chick, and though everyone (all men at least) insist God is a dude, I subscribe to the point that women give birth so God must have given birth to humanity.

Maleficent appears in the form of a tall, pale green skinned woman with yellow eyes and a horned headdress, symbolic of her dark magic. She is clad in a black and purple robe with bat wing-like edges, and wears a gold ring with a large circular black stone in it. She has a pet raven called Diablo, and a legion of goblins and troll-like entities at her command. In addition to this she carries a staff with a glowing green orb at the tip, through which she casts her spells, which include an ability to teleport herself from place to place or send bolts of lightning at enemies. She is also capable of shape shifting at will into numerous forms, including a floating light resembling a will-o’-the-wisp and a massive black and purple dragon. Despite this, she is in fact a fairy, like the other three fairy godmothers in the movie, rather than a sorceress. She is also renowned for her macabre beauty, possessing sharp, angled and striking features, and her attractive and seductive speaking voice.

So am I saying that God is evil? No. Again, this is just what I imagined God to look like. And the shape shifting this is something God is known for, anyway.

Now everyone is going to call me an idiot, but that’s okay, because if I’m an idiot than all children are idiots. And what child hasn’t thought or imagined something off-the-wall? Now, things change over the years, and their one-time viewpoint shifts to something more logical. However, when it comes to imagining what God looks like, what exactly is logical? Seriously, an old man with a white beard just isn’t it, people. So this guess is as good as any other.

And the next time you watch Sleeping Beauty, you’ll be thinking the same thing.