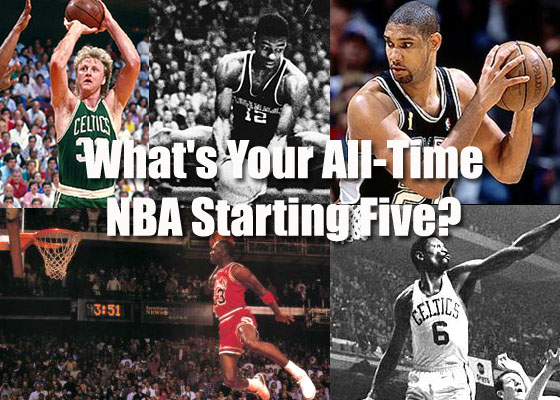 With the NBA season in full swing, it’s always fun to debate where current players rank among the all-time greats. Kobe Bryant and Lebron James are likely considered by most to be in the Top Ten all-time, but where do you rank guys like Kevin Garnett or Dirk Nowitzki?

How do they stack up against players from the past? Put it this way: if you were choosing up sides and you had your pick of one player at each position (point guard, shooting guard, small forward, power forward and center) from throughout NBA history, who would you choose? We want to hear your thoughts in the comments section, but first, here are our picks for the all-time greatest starting five in NBA history: 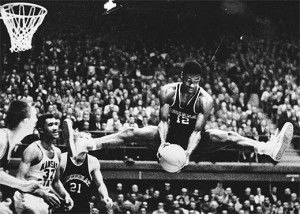 Right off the bat, we know we’re going to cause some debate with our point guard pick. It’s tough not to pick Magic Johnson or John Stockton, two of not only the greatest point guards but also players of all-time, but it’s also hard to argue against the Big O. After all, while Magic was great at churning out triple doubles, no one has come close to touching Robertson in that category, considering he averaged a triple double for an entire season. 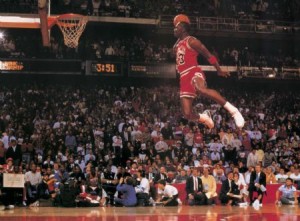 After starting out with what could cause a little controversy at the point guard spot, we’re happy to move on to a position that’s as clear cut as probably any position in any professional sport. Seriously, think of any position, any sport, where one player stands so far above his competition. Maybe the closest anyone could come is Jim Brown, but even his status as the greatest runningback is often debated.

His Airness redefined basketball in the late 80’s and on into the 90’s, winning six championships, five MVP’s, a Defensive Player of the Year award, 14 trips to the All-Star game, the Rookie of the Year, two Slam Dunk contests, and the list literally goes on and on…and on, and on, and on. He finished his career with averages of 30.1 points, 6.2 rebounds and 5.3 assists per game, and was the most unstoppable wing scorer in basketball history. At the end of the day, Air Jordan is, was, and always will be the greatest to ever play the game*. 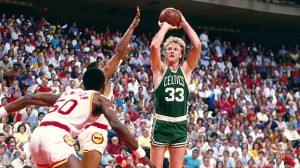 Ah, Larry Legend. The Hick from French Lick. The goofiest looking superstar in NBA history, and a guy who no one would ever have assumed was one of the most badass trash talkers to ever step on a basketball court based on that floppy blonde perm and bushy mustache. Listed at 6-9 in his playing days, there’s been some speculation that he was actually closer to 7-feet, making his incredible shooting touch and ballhandling ability that much more impressive.

A three-time NBA champion and three-time MVP, Bird was a 12-time All-Star and made the All-NBA First Team nine times in what would turn out to be a career shortened by nagging back injuries. Boasting averages of 24.3 points, 10.0 rebounds and 6.3 assists per game for his career, Bird was a transcendent shooter and passer. And like we said, he was one hell of a trash talker, for instance entering the locker room before the three-point shootout at All-Star weekend and asking his competitors, point blank, who was going to finish second. 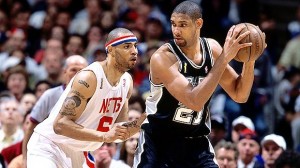 Our first, and only, current player to make our all-time starting five, Tim Duncan is both the most unassuming and underrated superstar in NBA history, and at this point, it’s hard to argue against him as the greatest power forward of all-time. Sure, you might be able to make an argument for Karl Malone or maybe Charles Barkley or Bob Pettit, but consider the numbers: four championships, two MVP awards, 13 All-Star selections, nine All-NBA First Team selections as well as eight All-Defensive First Team picks. The bottom line is that The Big Fundamental is truly one of the all-time greats.

He’s put up career averages of 20.6 points, 11.4 rebounds, 3.1 assists and 2.3 blocks, a true testament to his tremendous all-around game. A big guy who could easily play the center position, and likely would have if David Robinson hadn’t been on the Spurs when they drafted him, Duncan immediately showed enough skill to excel in the high post, proving to be a terrific passer with a soft touch from 15 feet and in. He’s also a winner who steps up when it matters, as evidenced by his career playoff averages of 22.7 points, 12.4 rebounds and 3.4 assists per game. 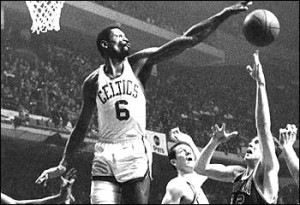 Okay, we started with a little controversy, and we’re going to end with a little more. Frankly, this was the toughest pick to make, because we could honestly go back and forth between Bill Russell and Wilt Chamberlain all day, every day, and never come up with a consistent answer. However, what it boils down to is the fact that we’re picking sides for a game of five on five, and we went with Russell simply because he fits in better with the rest of our squad.

What it all came down to for us, really, is that while Chamberlain was perhaps the most dominant post scorer of all-time, Russell is one of the greatest winners, and doesn’t need the ball in his hands. With Michael Jordan on the team, that’s important. One of the greatest rebounders and shot blockers in league history, Russell won a staggering 11 NBA championships and five MVP awards. He averaged only 15.1 points per game for his career, but that’s largely because he also only averaged 13.4 shot attempts per game. Let’s also not gloss over the fact that he pulled down 22.5 rebounds per game and chipped in 4.3 assists. We think that makes him about perfect as the center for this starting five. Of course ask us again tomorrow, and we’ll probably say it should be Wilt.

So those are our picks. Now you tell us: who’s your all-time starting five?