Sports > Hockey > Which NHLer Would You Want to Punch in the Face?

Which NHLer Would You Want to Punch in the Face? 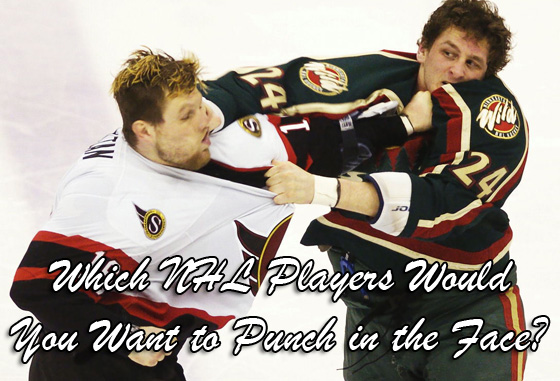 There are many hated players in the NHL, but several of these thugs are actually good people, considering their charity work and locker room loyalty. But others are just plain scum, do bad things for their team, enrage other teams, and have bad reputations with fans. Yes, some are debatable, but here are Gunaxin’s picks for the ballot of “Which NHL Player Would You Want to Punch in the Face?” Vote at the bottom.

Chris Simon
Simon has been involved in numerous on-ice incidents and has been suspended eight times for a total of 65 games. Simon once used a derogatory term against black player Mike Grier, he once struck Ryan Hollweg in the face with his hockey stick as he skated by, and he once stepped on the back of Jarkko Ruutu’s right leg with his skate and then went to the bench.

Claude Lemieux
Known league-wide as a dirty player, Lemieux once bit Calgary’s Jim Peplinski on the finger during a scuffle, and once violently checked Kris Draper of the Red Wings into the boards from behind during a playoff series, causing Draper to suffer a concussion, broken jaw, broken nose and broken cheekbone.

Dany Heatley
His reckless behavior got a teammate killed. Is there really anything more to say? Dan Snyder is dead, and Heatley gets to continue playing hockey and racing his cars. Even worse, Heatley is a good player, thus elevating his salary and his lifestyle, while the Snyder’s mourn the loss of their son.

Matt Cooke
In March, 2010, Cooke delivered a blow to the head of Boston’s Marc Savard, causing a concussion and the probable end of Savard’s season. In February 2004, Cooke speared Minnesota’s Matt Johnson. In the 2007–2008 season, delivered hits on three different opposition players which resulted in concussions; Chicago’s James Wisniewski, Calgary’s Daymond Langkow and Minnesota’s Petteri Nummelin. In the 2008–2009 season, Cooke checked the head of Rangers’ Artem Anisimov, hit the head of Scott Walker of the Carolina Hurricanes, and hit Ottawa’s Shean Donovan knee-to-knee which resulted in a potentially career threatening injury.

Mike Milbury
Once went into the stands to fight a fan, got into an altercation with a blogger at a Caps game, and stuck his foot in his mouth several times during the 2010 Olympics. He also ruined the New York Islanders with awful trades and signings. There was even a Facebook group called “I will pay J.R.’s (Jeremy Roenick’s) bail if he punches Mike Milbury in the face.”

Ray Emery
Aside from his on-ice incidents, which earned him several suspensions, Emery is known for his flamboyant lifestyle. He has 50 pairs of shoes, a dozen watches, and a $4000 suit as well as diamond chains. He’s been involved in road rage incidents, been stopped for speeding more than 30 times, and stunt driving. Oh, and he’s a goaltender.

Ron Hextall
The biggest thug goaltender of all time, Ron Hextall routinely got penalty minutes, something unheard of for a goaltender. He once got 113, a single season record for a goalie. He once attacked Chris Chelios during the playoffs and was suspended for the next 12 games.

Sean Avery
Even his own teams have suspended him, including Dallas and the Rangers, for off-ice and on-ice incidents. The NHL had to reinterpret the unsportsmanlike conduct rule after an incident with Avery. Don Cherry once said, “I’ve known this kid since he was about 16 years old; Once a jerk, always a jerk.”

Sidney Crosby
Despite being one of the best players in the league, Crosby is known as a crybaby for frequently complaining to the referees and to the media about different things. He once sucker-punched another player under the legs.