Sports > Soccer > Which World Cup Player Would You Want to Punch?

Which World Cup Player Would You Want to Punch? 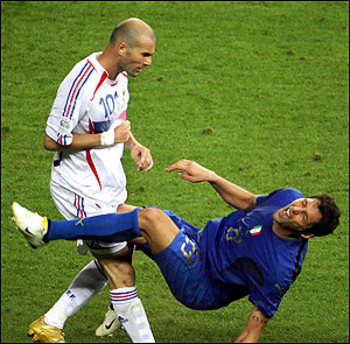 We said PUNCH, not headbutt.

The World Cup is upon us in South Africa. Because we American’s hold soccer just above competitive cup-stacking in terms of national sporting priority, it might be difficult to properly root against certain teams, and find the nerve to want to punch certain players. These ten guys, inadvertently or not, make the tournament easier to get passionate about by inciting hatred. Vote on the one you want to punch the most at the bottom. Is your favorite not on the list? Name him in the comments.

Eight years ago, Eto’o and four of his cronies laid a whuppin on his former agent… and then took his shoes, which apparently is some kind of Cameroonian ‘sleeps with the fishes’ gesture. He also allegedly headbutted a journalist in his home country a couple years ago. If you ever see this guy in person, you might want to be careful not to make him angry. Shoes cost money, and getting a tetanus shot for walking home without shoes is bound to suck just as much as when you were 13.

Like it or not (probably not), diving/flopping is a part of soccer like venereal diseases are a part of sex. Not only is Eboue’ a prominent flopper/diver, his attitude and performance on the pitch in the Premier League sucked so badly that at the end of 2008 that his own fans at Arsenal booed him.

Ok, technically this all-time great retired years ago. But he is Argentina’s coach, and enough of a douchebag to qualify for the list. Think entitlement among great retired athletes is an American thing? Maradona asked for luxury toilets for his team’s stay in South Africa. ‘That sounds reasonable’, said some starving African kid with every disease you can get on Oregon Trail. Maradona might also be the most famous guy in the world who hates America who’s not a third-world dictator. He was quoted on Hugo Chavez’ radio program three years ago as saying ‘I hate everything that comes from the United States. I hate it with all my strength.’ We’re assuming he meant all the strength he has left that cocaine didn’t liquefy.

Being public enemy #1 in one country, as Henry is in Ireland, takes serious work. Granted, forgiveness (like sobriety) isn’t something the Irish are known for, but celebrating an illegitimate win that cost another country its spot in the World Cup takes the kind of gall that inspires unrequited hatred. To be fair, Henry did admit almost immediately afterward that he touched the ball with his hand, but the damage was done…and the French still suck.

If we get steamrolled by England right off the bat, we’ll know who to thank (and punch). Altidore famously predicted the stars & stripes would beat our former colonial overlords by a score of 3-0 when he saw David Beckham at a basketball game earlier this year. Not to be outdone by…himself, Altidore sprained his ankle in a training drill recently, possibly screwing the U.S. over in mind and in body.

Nani is famous for doing a capoeira-style backflip to celebrate when he scores a goal. Capoeira is a glitzy Brazilian form of martial arts, and by the look of this clip below, Nani’s definition of Capoeira is juuuust a bit different from everyone else’s.

Terry’s career as of late is kind of similar to Tiger Woods’ fall from grace. Back in January, the British tabloid press learned that Terry, who is married with two children, had an affair with Vanessa Perroncel– former girlfriend of teammate Wayne Bridge and mother of his child. The scandal caused Terry to be stripped of his captaincy,  Bridge to more-or-less retire from international play, and the English national team to navigate an emotional cluster-fuck of ‘who’s-side-are-you-on?’ drama.

How any man can be married to this and still cheat is beyond all of us. But that’s exactly what Ashley Cole did, and why wife Cheryl eventually tossed him out on his ass. Even before that, Cole was fined 100,000 pounds by the Premier League in 2005 for meeting with another team (Chelsea) about a possible transfer because he saw his original club’s (Aresenal) offer of 55,000 pounds a week as ‘insulting’.

Drogba looks like something a starving Renaissance man sculpted out of marble while on acid, which makes him all the more despised for flopping like the fish in that Faith No More video whenever a defender gets within a two foot radius of him. As this clip indicates, he mixes in cheap shots when he’s arguing the same way he does when he plays. He broke his arm in a warm-up game against Japan, so you might not actually see him on the pitch.

The trouble with Ronaldo isn’t PEDs, a sex scandal, an arrest record, or any other pratfall other athletes of his magnitude have fallen prey to. Most of the hatred he generates boils down to plain old jealousy. He’s rich, arrogant, uber-talented, sleeps with beautiful women, and doesn’t care one iota that people have a problem with any of that. In fact, he embraces it like a WWE villain without the shrunken testicles.

Hear this article discussed in more depth on our World Cup Preview Podcast! The Gunaxin Show is classified as Explicit, so probably NSFW, unless you work here.