Sports > Other > Who is the Most Dominant Athlete Ever?

Who is the Most Dominant Athlete Ever? 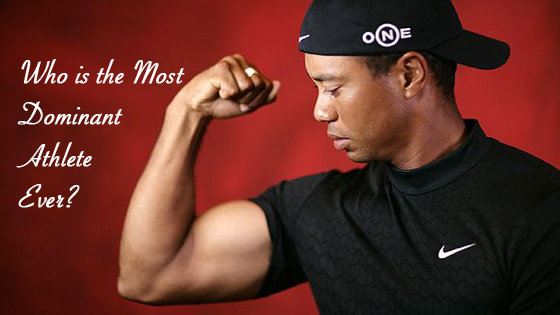 This is one of those questions that guys can discuss until the end of time. When I bring it up amongst friends, the discussion gets heated. So, for this list, there will be some ground rules:

VOTE FOR THE MOST DOMINANT ATHLETE AT THE BOTTOM

Richard Petty
Case for: His 200 career NASCAR wins are 95 more than the next guy, he won seven championships, and he’s still considered the best of all time in that sport.
Case against: None.

Michael Schumacher
Case for: His 91 career Formula 1 wins are 40 more than the next guy, and he has won seven championships.
Case against: Schumacher’s success often drew controversy, particularly in title-deciding collisions in 1994 and 1997.

Jimmy Johnson just won his fourth consecutive championship, but his career is far from over and he’s got a long way to go to be considered more dominant than Petty, or even Dale Earnhardt in NASCAR.

Ty Cobb
Case for: A .367 lifetime batting average, far and away the best in baseball history.
Case against: Played in an era where players didn’t hit for power. Also, he was a downright awful person and he’d get booed out of the stadium if he played today.

Babe Ruth
Case for: He was a great pitcher when he pitched, a great hitter when he hit, and sometimes hit more home runs than entire teams. He had a .342 lifetime average.
Case against: Not much, although some argue that he didn’t have to compete against the Negro League players who could have given him more competition.

Not: Barry Bonds and I shouldn’t even have to explain why.

Baseball is one of those sports that anyone you ask will tell you someone different is the most dominant. Others we considered were Willie Mays, Ted Williams and Bob Gibson. Sandy Koufax dominated for just a few years but not long enough.

Michael Jordan
Case for: 2 Olympic gold medals, 6-time NBA champion, 6-time NBA Finals MVP, 5-time NBA MVP, 10 NBA scoring titles, holds the NBA records for highest career regular-season scoring average (30.12 points per game) and highest career playoff scoring average (33.4 points per game).
Case against: His stint with the Wizards was a disaster and probably still irks him since he is not one to lose a grudge. Taking off about two seasons to play baseball may have cost him two more championships. Also, other players have offensive records that Jordan didn’t come close to breaking.

Wilt Chamberlain
Case for: 2-time NBA champion, 4-time NBA MVP, once averaged 50.4 points a game in a season, once scored 100 points in a game, holds 72 official NBA records, and never fouled out of a game.
Case against: Didn’t win enough championships, though we’ve already stated that that’s not the barometer for being the most ‘dominating athlete.’

The general consensus in basketball is that Michael Jordan is the best of all time (though Celtics fans will say Bill Russell simply because he has more championships than anyone).

Muhammad Ali
Case for: He’s often considered one of the greatest of all time.
Case against: He did not live up to his potential because he left the sport in his prime. Also, he lost five times, didn’t exactly go out ‘on top,’ but excluding him from this list would cause a web riot.

Joe Louis
Case for: Championship reign lasted 140 consecutive months. Named the greatest heavyweight of all time by the International Boxing Research Organization, and was ranked number one on Ring Magazine’s list of 100 Greatest Punchers of All Time.
Case against: Ummm… never fought Mike Tyson in his prime?

Sugar Ray Robinson
Case for: Frequently cited as the greatest boxer of all time, Robinson’s performances at the welterweight and middleweight divisions prompted sportswriters to create “pound for pound” rankings, where they compared fighters regardless of weight.
Case against: Lost 19 times.

Not: Mike Tyson, who, like others, dominated the sport for a period of time, then lost, continued to lose, and tarnished a legacy. Not: Rocky Marciano because few believe he fought anyone that tough.

Boxing sparks quite a bit of debate because there are many dominant ones from different eras.

Lance Armstrong
Case for: After surviving cancer, he won the Tour de France seven straight times. At the age of 38 he came back and finished third.
Case against: Accused of doping. Also, many forget that cycling is a team sport, and Armstrong’s team deserves credit for guiding him to victory, as well.

It’s not uncommon to hear someone say Armstrong is the most dominant athlete of all time.

Jim Brown
Case for: In 2002, he was named by The Sporting News as the greatest professional football player ever. In 118 career games, Brown averaged 104.3 yards per game and 5.2 yards per carry. Only Barry Sanders comes close to those totals.
Case against: None.

Joe Montana
Case for: He won four Super Bowls and helped his teams to 31 fourth quarter come-from-behind wins.
Case against: Other quarterbacks either broke Montana’s records or hold records that Montana never did, and even won the same number of championships. ‘Who’s the best quarterback ever?’ is an article on its own, but we’ll stick with Montana as the representative for this position.

Lawrence Taylor
Case for: He has been called the greatest defensive player of all time by members of the media, former players, and coaches.
Case against: Not much, though, like other athletes, his off-field issues make some people forget about his on-field success.

Tiger Woods
Case for: Was already considered the best golfer ever very early in his career, and it is far from over.
Case against: Though he is on course to obliterate them, he does not yet hold the records for majors or wins, so it’s hard to say he’s the most dominant ever if he hasn’t yet surpassed these milestones.

Jack Nicklaus
Case for: He currently holds the record with 18 major victories.
Case against: He’s not Tiger Woods.

Not: Arnold Palmer. He may have ‘transcended’ the game and made the sport incredibly popular, but his records pail in comparison to others.

Tiger Woods should be a finalist for the most dominant of all time.

Alexander Karelin
Case for: He was undefeated for 13 years. He won gold medals at the 1988, 1992 and 1996 Olympic Games. He went the last six years of his unbeaten streak without giving up a point.
Case against: Relatively speaking, Greco-Roman wrestling is too small of a sport compared to the others.

While Greco-Roman wrestling isn’t necessarily a sport that many argue about, Karelin’s 13-year winning streak is perhaps the most dominating accomplishment on this list. Michael Jordan, Tiger Woods, Babe Ruth, or anyone else accomplished anything like that.

Bobby Orr
Case for: Led the league in scoring, as a defenseman. Once had a plus/minus of +124 (to put that in perspective, +37 led the league last season).
Case against: His career wasn’t long enough.

Not: Gordie Howe and Mario Lemieux, because we’re confident that Gretzky and Orr were ultimately more dominant.

Secretariat
Case for: In 1973 became the first U.S. Triple Crown champion in 25 years, setting new race records in the Kentucky Derby and the Belmont Stakes.
Case against: He’s a horse.

You all know that you’re going to vote for Secretariat as a goof, so go ahead and cast your ballot now.

Diego Maradona
Case for: Widely considered to be the second best soccer player of all time.
Case against: Only people from Argentina think that he is better than Pele. Also, a suspension for drugs kept him off the field for some time.

Pele should be a finalist for the most dominating athlete ever.

Michael Phelps
Case for: He won eight gold medals at the 2008 Olympic Games.
Case against: Some of those world records may have been set with the aid of better swimsuit technology that Mark Spitz and Johnny Weissmuller didn’t have.

Mark Spitz
Case for: Amongst other things, he won seven gold medals at the 1972 Olympic Games.
Case against: Lost his records to Phelps.

Phelps will likely be a finalist for the most dominant athlete ever.

Roger Federer
Case for: Already the all-time leader in men’s singles Grand Slam victories, Federer doesn’t look like he’s slowing down.
Case against: For a period of time, Rafael Nadal overtook Federer as the best player in the world, defeating him in the French Open and Wimbledon finals. It’s hard to say Federer is the best ever when he wasn’t even number one in his sport while in his prime.

Rod Laver
Case for: He was the world No. 1 player for seven consecutive years, and is the only player to have twice won all four Grand Slam singles titles in the same year. He would have had even more titles had the rules for majors been different back then.
Case against: He didn’t have to play Roger Federer.

Not: Pete Sampras because he didn’t come close to winning the French Open, the one gaping hole on his resume.

Usain Bolt
Case for: He holds the world record for the 100 metres, the 200 metres and, along with his teammates, the 4×100 metres relay. And he is still young so has more career ahead of him.
Case against: Does one extraordinary year make one the ‘most dominant athlete of all time?’

Edwin Moses
Case for: Between 1977 and 1987, Moses won 107 consecutive finals. Also, he helped set some of the most strict anti-drug policies for track and field.
Case against: None.

We also considered Jesse Owens, but he wasn’t as dominant as long as the above. We also give a shout out to Jim Thorpe, who is perhaps the most versatile athlete of all time.

Edwin Moses should be a finalist for most dominant athlete of all time.