The Whore Of Akron : Reviewed 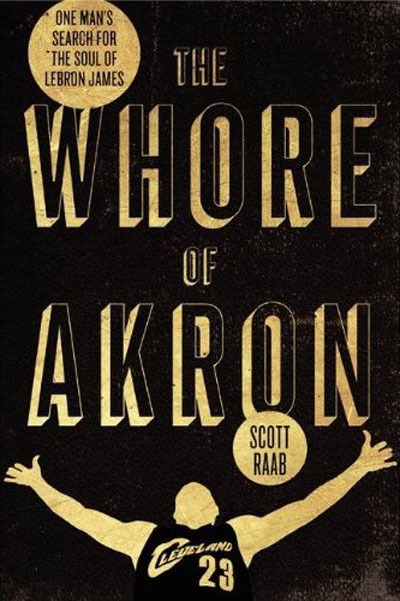 “It isn’t a nice story. It is a horrible fucking story.”

Those were author Scott Raab’s words in New York City last week when discussing the story told of Cleveland sports and LeBron James his latest book “The Whore of Akron.”

It is common for a sports fan to hate LeBron James. The subject is almost exhausting at this point after over a year of tearing him down and relishing in his misery of failing in the NBA Finals. Yet, Raab’s “The Whore of Akron” will one day be looked at as the Bible of the LeBron hate for putting together such an intriguing, engrossing read.

Raab is a self-critical Cleveland sports fan whose passion for his city bleeds out in every word that he writes. Traces of the city’s cursed sports history coinciding with Raab’s personal problems that he is exceedingly blunt about are outlined as a parallel story to LeBron’s final days in Cleveland and inaugural season in Miami.

Raab struggled to get credentialed the entire season from the Heat but that doesn’t prevent him telling a great first person account tracking LeBron’s first season in Miami. There are interesting tidbits throughout the book of his discussions with Cleveland owner Dan Gilbert, various players from Cleveland and Miami, ESPN executives, and other writers. Yet, the real highlights is when Raab riffs on his angst toward James and Cleveland sports history, which ultimately come together hilariously in one chapter where Raab hallucinates over a peach cobbler.

Raab is a character. He lit up the room on the night he gave the quote I led this article with after following Henry Abbot and Harvey Araton, two other damn good NBA writers. He defended the title of the book. Shot down rumors of Delonte West/Gloria James being sexually involved. Sympathized with Cleveland fans in the audience. And ultimately came off as a genuine person, who loves Cleveland and is simply sick of his city losing.

“The Whore of Akron” is the kind of book that any sports fan would appreciate because of the writing style and history presented through out it. If you are a basketball fan, it is a no brainer to get your hands on this book as soon as possible.