Media > Television > Whose Time is Up on Dexter?

Whose Time is Up on Dexter? 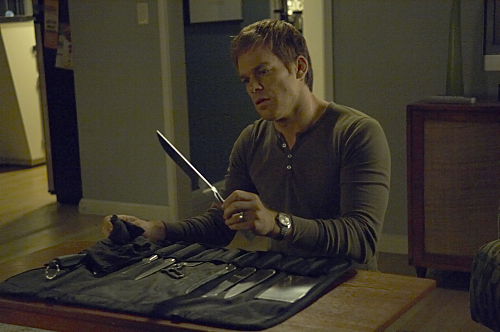 I’m going to assume that if you’re reading this, you are all caught up on this season of Dexter. So this is your last warning that there are spoilers in this post about the current events on the show. So turn back now if you want to stay surprised.

First, now that Lost is over, Dexter is my favorite show on television. I think it’s a safe bet that it’s Showtime’s favorite show on TV as well since they just renewed it for a sixth season. And if the preview for this Sunday’s season finale are any indication, quite a few characters may find themselves in hot water and possibly even a body bag.

The finale from last season, which was one of the most shocking in television history, proved that no character on this show is safe from the brilliant writers. Rita’s death and the way it was played out in the season’s final moments was an utter stroke of genius that found me with my jaw hanging wide open for a long time. I’m thinking this season will be no different. So let’s take a look at who might get the axe (or whatever weapon Dexter may choose) in the finale this Sunday. 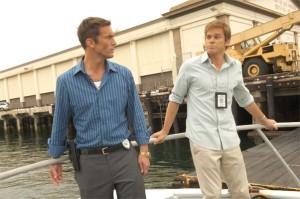 Detective Joey Quinn – This is the popular pick. When he hired Stan Liddy to spy on Dexter I figured that was the beginning of the end for Joey. Also, the fact that whomever Debra decides to sleep with or get involved with in any way on the show, well, they usually find themselves outside the pearly gates. But I think since the writers know we’re expecting this, it makes it more unlikely to happen. Especially since Dex offed Liddy and his evidence in the last episode. However, I could see Quinn getting accused of his murder since he was near the scene when Liddy died AND he got some of his blood on his shoe unknowingly. Just a hunch, but Quinn could go on trial if he survives this season.

Jordan Chase – Well, this is a no-brainer. Dex always gets the main “villain” at season’s end, so I expect Jordan to have a date with Dexter’s dark passenger for sure. Anything short of that and we, the fans, will feel cheated.

Detective Debra Morgan – Man, I would LOVE this. Debra is easily the most annoying character on the show. However, she is also the glue that holds Dexter together at times. He would really go on a killing spree should something happen to her. Again, I like the sound of that. However, since Michael C. Hall and Jennifer Carpenter are married in real life, I think the chances of this are as close to the chances of them killing Dexter off. 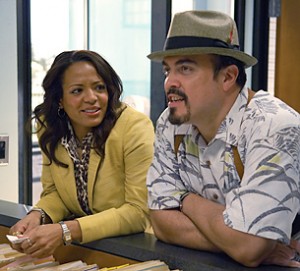 Lieutenant Maria LaGuerta – This season Maria has been even more of a supporting character than ever. Her role has been reduced almost to that of an afterthought. I think the writers are out of ideas for her character and I think she could go. This would clear the way for Angel to become the new Lieutenant.

Sergeant Angel Batista – I think either him or LaGuerta will go. Both their story lines are stale and they have no more point on the show unless something devastating happens to the other. I’d prefer Maria go before Angel.

Vince Masuka – Since he is basically the only comic relief on the show, no chance.

Lumen Pierce – It’s no secret to anyone who reads my twitter feeds that I’m not a fan of Julia Stiles. I think she is an average actress and I just don’t buy her getting into a relationship with Dexter so quickly after being beaten and raped by a group of dudes for an undisclosed amount of time. But, also, because I like Dexter working alone. When he is alone, we get more Harry Morgan and James Remar is brilliant in the already short amount of screen time he gets. I’m not sure if she dies, but I don’t think she’s back next season. I think Jordan Chase gets her in the end.

Astor, Cody & Harrison – After taking Rita from Dexter last season, I believe his family is safe… for now.

Sonya the Nanny – This is my wildcard guess. I think Jordan or one of his cronies come after Harrison in a preemptive strike on Dexter and Sonya buys the farm trying to protect him. She’s been a lifesaver to Dexter this season and nothing goes smoothly in his life for long.

Not exactly the most happy and shiny article, I know. But this is a show that isn’t really known for its happily ever after type endings. Tune in this Sunday night and follow me on Twitter to discuss the finale.