Sports > Hockey > Why are the Thrashers Fainting?

Why are the Thrashers Fainting? 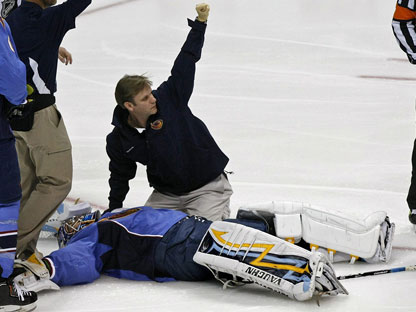 You may recall Atlanta’s goaltender Ondrej Pavelec unexpectedly fainting during the team’s first game of the season against the Washington Capitals. The incident can be chalked up under an incident of the “freak” variety as there really wasn’t any explanation to why the goalie suddenly fainted.

He now has company as another player, Freddy Meyer, collapsed suddenly during the team’s game against Calgary on Thursday. Meyer fainted right at center ice but was later able to skate off under his own power. He is under observation, but so far hasn’t exhibited any signs of post-concussion syndrome, or any indication as to why he lost consciousness.

What the hell is going on in Alanta?

It’s pretty rare for a player to faint or pass out during a game, let alone on the ice, and it is extremely rare for it to happen to the same team twice in a season.

What is even more bizarre is that so far neither players that have lost consciousness have displayed any signs of why they might have passed out. Pavelec has played well since his frightening incident on opening night and (so far) Meyer has not shown any symptoms/signs of anything being wrong.

Is it really just a coincidence that two players that haven’t exhibited any history of fainting/passing out would lose consciousness on their home ice, during play or is something behind this?

One theory is that there may be some sort of chemical on the ice that may be reacting with the players when they breath in, but it seems like it would have a much wider effect if that really was the cause. Perhaps something in relation to the Zamboni?

Another theory is that the paint they are using for the logo, blue lines and red line could be emitting some sort of hazardous chemical, but again, if that was the cause we’d think it’d be effecting more players more often.

For now, it remains a mystery why two perfectly healthy players both lost consciousness on their home ice during the course of a game. Neither were on the bench and neither were directly involved in the play, which allows us to rule out contact or injury.

Hopefully there aren’t any other incidents. If there is however a third occurrence, we’d fully expect the team and possibly the league to do some serious investigating.