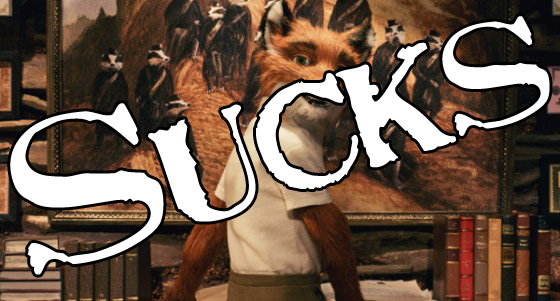 Being a fan of animated films (and stop-motion animation, for that matter), I knew I had to check out Fantastic Mr. Fox (on Blu Ray DVD), which was nominated for Best Animated Film at the 2010 Oscars. There are few films such as this that I have anything bad to say about because so much care and preparation goes into them, and they rarely disappoint.

Within three minutes of watching, I knew I was in for a long, bumpy ride.

But how could that be? This film has earned nothing but praise. All the critics say Wes Anderson did a fantastic job.

Here’s why: Only those who get Wes Anderson humor went to see it. The rest of the world either didn’t consider seeing it, or were so disoriented after the first few minutes that they walked out of the theater. Those remaining sang its praises to the heavens for all to hear.

By the way, the film flopped at the box office, barely regaining its budget. While that’s not necessarily an indication of its quality, it should be considered because those who apparently don’t get Wes Anderson would trash it if they stuck around long enough to finish watching or even bothered to show up to the theater.

Here are some reasons I believe it sucked, which may be the same reasons why some people think it’s good:

In the end, I felt as if I had just watched a film with its head up its own ass and heard nothing but applause. And that is why I’m writing this – I am extremely jealous of those who stayed clear of it altogether, and therefore weren’t qualified to pass judgment. Let the Anderson fans give it five stars, because apparently if you didn’t love it, you didn’t get it and shouldn’t have seen it.