So you may have heard that Hulu is gonna start charging, and you may have seen it be written off as dead by certain intellectual powerhouses, but does Hulu really have to start charging? Of course not, don’t be stupid. It’s greed. We all know that. We all know the executives are being idiots too – the thing is we would think that because we want programs for free God damn it! It doesn’t take a nobel prize winning economist to figure out and explain why this is a stupid commercial move (which is lucky, ‘cos we don’t have any working here). Britain has no less than 4 very successful online services offering free access to over 10 channels worth of programming, which seems to us to be proof that Hulu is entirely capable of remaining free. The two best examples are: 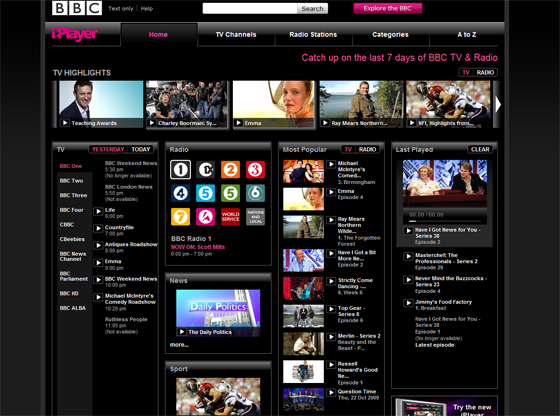 Easily the best known example of free content done right, the BBC’s online service gives you unlimited access to all the programming from the last week, across all 10 of its channels and all 96 million of its radio stations. There is also a limited ‘archive’ element that has older stuff, usually not particularly interesting but supposedly this feature will be expanded upon.

It’s genuinely brilliant for catching up with stuff you missed, but at the same time, does it really do anything that a DVR can’t? Not really, but you have the option of browsing and picking something rather than just the programs you taped. The actual playback is very smooth, and if you want you can download the program to watch later. The best part however, is the lack of adverts.

Of course, it’s the lack of adverts that make this an unfair comparison to any other service. The BBC gets all its funding from TV licence fees, so it doesn’t need to advertise, and doesn’t have to worry about being profitable in quite the same way as any other network. On the other hand, you don’t need a TV licence to use the iPlayer, which could hurt the beeb in the long run. 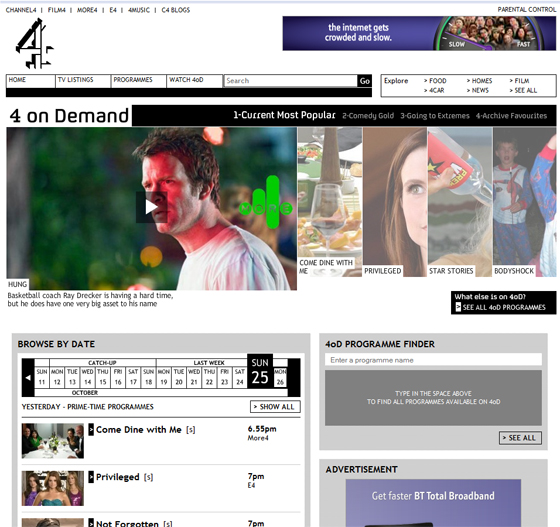 Channel 4’s “4 On Demand” service is what Hulu dreams of growing up to be. Here you have access to several weeks worth of aired television, an archive crammed full of the best programs, and a particularly excellent comedy section. You get all of this, and all you have to put up with is about 1 minute of adverts per half hour – by our reckoning, that’s at least 5 times less than it would be on TV.

There are other adverts on the page, but they aren’t obnoxious, and if they do distract you then you probably have ADD. In addition to plain old channel 4, you also get access to More4 (They call it their ‘adult entertainment’ channel – it’s documentaries, grown up comedy and the like) and E4 (This channel is basically just Scrubs and Friends repeats).

4OD is a hugely popular resource in Britain, and is absolute proof that adverts can support free content quite comfortably. For shame Hulu! For shame!

So there you have 2 very nice examples of free content. Our question for Hulu – nae, our demand! – is why the devil can’t you just be happy with some advertising income and aim for a combination of these two? By charging a subscription, you drive people away, and then you have nothing. Corporate greed at its finest children.