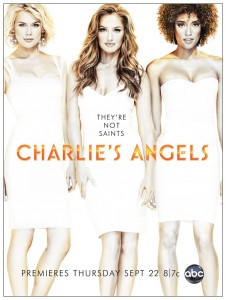 The new reboot of Charlie’s Angels from Drew Barrymore hit the small screen last week, amongst a bevy of new show premieres. Personally I applaud anytime a scripted show can make its way to our living room, and its an added bonus when its a classic like Charlie’s Angels.

So yeah, think about what Hawaii Five-0 did last year, and you’re probably in the heads of the folks who brought back the Angels. Oh, and did we mention the show features Minka Kelly? That’s enough of a reason to check it out in our book. The trailer with character introductions follows below :

The folks at ABC would like to encourage you to check out the official Facebook page, where you can “Join the Charlie’s Angels Mission Challenge“. There you can complete missions, collect badges, watch exclusive videos, and earn your wings! To encourage such behavior, they’ve offered a $100 Visa Cash Card that we can give to one of you to “heat up your night.”

To be eligible to win, just respond in the comments below (and check the box to post to your Facebook wall) to tell us your thoughts on last week’s premiere of Charlie’s Angels. If you missed the premiere, you can check it out on ABC’s site. We’ll select a winner at random from the comments, so good luck, and don’t miss the second episode this Thursday night at 8/7c on ABC.