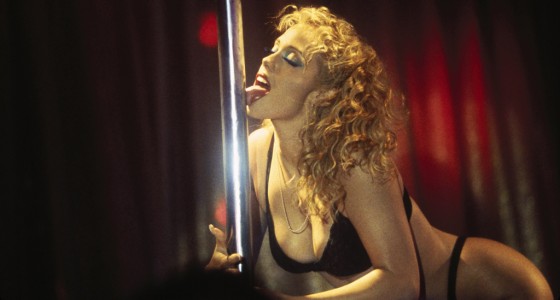 Amazingly enough, its been 15 years since Elizabeth Berkley got naked for us in Showgirls. In celebration of the campy film’s anniversary, a “15th Anniversary Sinsational Edition” has recently been released on Blu-Ray : 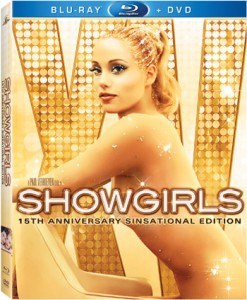 It’s Vegas, baby, and Nomi’s (Elizabeth Berkley) dreams and desires to make it big are as sharp as a stiletto heel. When she catches the eye of Cristal (Gina Gershon), the Stardust’s sexy headliner, Nomi is on the brink of living her dream. But she soon realizes that there is only room for one starlet on the marquee… and that either she or Cristal will have to take the fall!

A sinfully lusty film no one should miss, Showgirls also stars Kyle MacLachlan and Robert Davi as the men in the middle of this Sin City cat fight. The Blu-ray edition is busting with special features including the “Pole Dancing: Finding Your Inner Stripper” featurette, a lap dance tutorial from the world-famous Girls of Scores, commentary from Showgirls connoisseur David Schmader, a full-length trivia track and more.

That’s so cute that they gave us a plot summary, even though sales will most likely be driven by guys wanting to watch the Pool Scene in HD, and not by the trials and tribulations of Nomi. We recently discussed Berkley’s striperiffic appearance on our Podcast, so this is perfect timing eh? Now to help celebrate the release of this new version, we have three copies of the flick on Blu-Ray to give away to lucky Gunaxin readers.

In order to be eligible for the prize, you must complete just two easy steps :