Win Stuff with Playing For Change – Songs Around the World 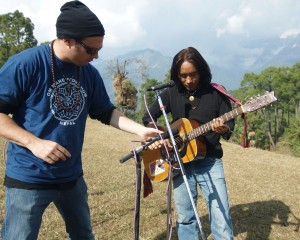 There’s a new CD / DVD combo coming out called “Playing For Change – Songs Around the World“, and we have two copies to give away as prizes to lucky Gunaxin readers. It’s a music collaboration of a variety of artists including Keb’ Mo’, U2’s Bono and Bob Marley and is the brainchild of Grammy award winning producer Mark Johnson. The CD/DVD is in stores April 28.

“The act of playing music with people of different cultures, religions, economics and politics is a powerful statement. It shows that we can find ways of working together and sharing our experiences with one another in a positive way. Music has the power to break down the walls between cultures, to raise the level of human understanding.” ~ Mark Johnson, founder, Playing for Change

From the press release:

Some of the magical moments include Ireland’s Omagh Community Youth Choir singing
“Love Rescue Me,” written by U2 and Bob Dylan, and American street musicians Roger Ridley and Grandpa Elliott harmonizing with Clarence Bekker from the Netherlands amid an assembly of artists from Russia, Spain, Venezuela, France and Brazil on the Ben E. King/Leiber & Stoller classic “Stand By Me,” the video of which has already become a YouTube sensation with over seven million views.

Ok, so it might seem a little cheesy, but stick with the video (that starts a bit slow), it’s actually fairly well done.

Winning the prizes will be really simple. Since today is #followfriday on Twitter, the first two people to Follow us on Twitter and then Tweet @Gunaxin for #followfriday will win a copy. Its that simple.