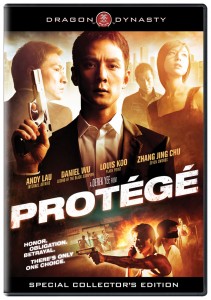 Today we have a chance for you to win a copy of Protégé on DVD. Here is a little bit about the film:

For an undercover drug trafficker, the fine line between right and wrong is tested beyond its limits when PROTÉGÉ debuts on DVD February 24th on the Dragon Dynasty label from Genius Products and The Weinstein Company.  With a cast of Asian cinema superstars including Andy Lau (House of Flying Daggers),  Daniel Wu (Legend of the Black Scorpion), Louis Koo (Flash Point) and  Jingchu Zhang (Seven Swords), PROTÉGÉ earned Lau a 2007 Hong Kong Award for Best Supporting Actor and received nine Hong Kong Award nominations*, including Best Picture, Best Actress (Zhang) and Best Supporting Actor (Koo).  Based on true stories of undercover agents on the police force, PROTÉGÉ follows their story among the clandestine drug world, as they struggle to balance both justice and crime.

And here is the trailer:

Winning the prizes will be really simple. On Friday February 27th, we will select 1 winner each from both our Twitter followers, and our Facebook group. In order to have the best chance of winning, you should join both. In the future we will have additional contests, and being members of these groups will make you eligible for those prizes as well. Good luck, and remember if you don’t win, go buy it.